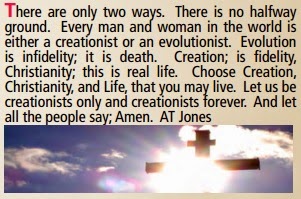 Following up from an earlier post, it's no surprise that the second part of Creationist or Evolutionist appears in this week's Waiuku Post. It's a rambling affair that concludes with one of those dark threats fanatics make when their arguments are weak.

"Every man and woman in the world is either a creationist or an evolutionist."

"Evolution is infidelity; it is death. Creation; is fidelity, Christianity; this is real life. Choose Creation, Christianity, and Life, that you may live."

Sophisticated readers (anyone capable of seeing shades of grey) who find this way over the top may object but, alas, this caricature is what is too often promoted - and accepted - as the Christian consensus. And it's not as though anyone with a more balanced perspective is speaking out. No wonder the churches are dying. Recently Waiuku's only Anglican church closed its doors, selling off the fixtures (I watched as pews were loaded onto the back of a truck). On the opposite side of the road a historic Methodist church has been rebranded as a Shinto shrine. I doubt too many of those congregants would have agreed with dogmatic fundamentalist statements like those quoted, but stupidity sticks by association. 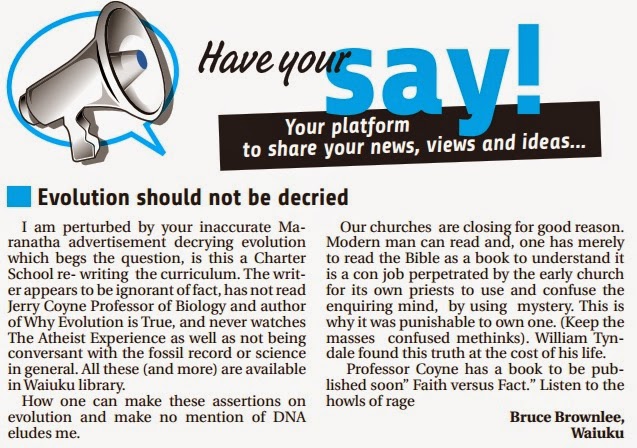 This same issue of the Post features a letter from a local atheist taking the earlier Maranatha ad to task. Fair enough I guess. But what would be really helpful - a letter from a Christian strongly expressing a dissenting view from the Maranatha one - is of course absent.

And therein lies half the problem.

Waiuku is of course a small town that most people have never heard of, but the issues there are a microcosm of those being fought over in many places in many nations. In the Christian camp the idiots are winning, and the consequent slide into irrelevance now seems unstoppable.
Posted by Gavin R at 16:51