Paul: The Measure of the Man 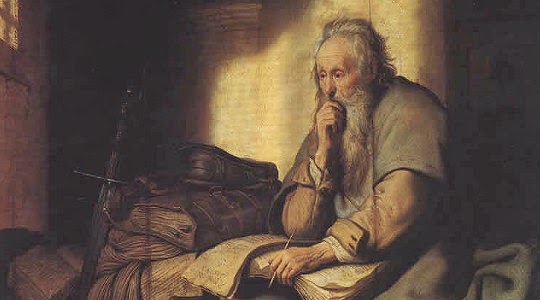 There has been an awful lot of rubbish written about Paul, the apostle to the Gentiles. Apologists wax eloquent about his theological genius and depth of insight into the human condition. Augustine, Luther and other worthies have cast their own mantle over his shoulders in order to convince lesser mortals that it is in fact Paul's mantle that covers theirs. Countless tomes have been written, gallons of ink spilled, in a thousand attempts to make sense of the great man's letters.

Spiritual depth and genius, however, are perhaps not the most obvious explanations for Paul's "impenetrability". After all, as it's clear from his own writings, the apostle was a cantankerous old coot. Perhaps he was just incoherent, much like a fickle politician on the hustings, making up policy according to whim. It certainly has been suggested.

Or perhaps there was method in his madness, though not of a particularly flattering variety. Enter Gerd Lüdemann.

Lüdemann has, I think, got the measure of Paul, and he's not at all intimidated. Being a German professor, he's written some typically dense studies on the apostle that don't exactly make for light reading, especially for the non-specialist. But in his latest slim volume for Polebridge Press, The Earliest Christian Text, he gets straight to the point.


We encounter in Paul a tremendous degree of self-consciousness and self-importance; his emphatic statement that he was superior to many of his contemporaries in observing the law is not only a reflection of his Pharisaic sense of superiority, but also has a basis in his character...

It comes as no surprise that Paul dominated his communities by insisting on his wishes and authority and requiring the compliance of others. His claims of apostolic authority reinforced his sense of infallibility and often led him to bully any who disagreed. As one would expect, he thus gained devoted followers among docile members but also repelled many who were not easily swayed.