Bob Brinsmead in the NYT 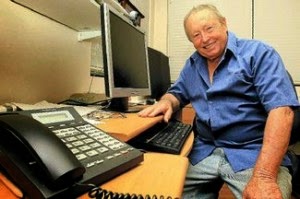 Bob Brinsmead was a huge influence in my own journey from sectarian Christianity to the place I am today. Bob, a former hardline Adventist, came to be a thorn in the side of his former denomination, advocating a radical "gospel plus nothing" theology and publishing an influential magazine, Verdict, that led many - including many outside Adventism - to abandon Sabbatarianism and rethink their concept of God.

That was a long time ago; Verdict ceased publication in the 1980s, and Bob moved on to other things. So it comes as a surprise to see his name appearing in the October 10 New York Times in a feature on Edward Fudge and "conditional immortality". Somewhere I still have a copy of the first edition of The Fire That Consumes, mentioned in the article.


Robert D. Brinsmead’s theological interest has inspired most of his books and papers. Bob will tell you that being a theologian doesn’t mean that one can pretend to have an extensive knowledge of God. After a lifetime of thinking in this field, he readily admits, “All that I know about God could be written on a postage stamp with a large piece of chalk.” He concurs with Alexander Pope’s poetic line, “Cease from God to scan / the proper study of mankind is man.” So Bob says that good theology is thinking about the mystery of human consciousness, the mystery of love, the nature of the human spirit, the ground of being, the quest for meaning, and the great story of the human exodus to freedom, to an ever improving human condition and a human potential that in the words of Freeman Dyson “is infinite in all directions.” His scholarly interest has covered history, apocalyptic, myth, and literary criticism in the age of science. He describes his thought as being spiritual rather than religious. Unlike some ideologues who start out with a paradigm (system of thought or worldview) and then spend the rest of their lives defending it like a patch of turf, Bob’s ideas have always been evolving and developing. He is more like a man on a journey who doesn’t have to defend any patch of turf.