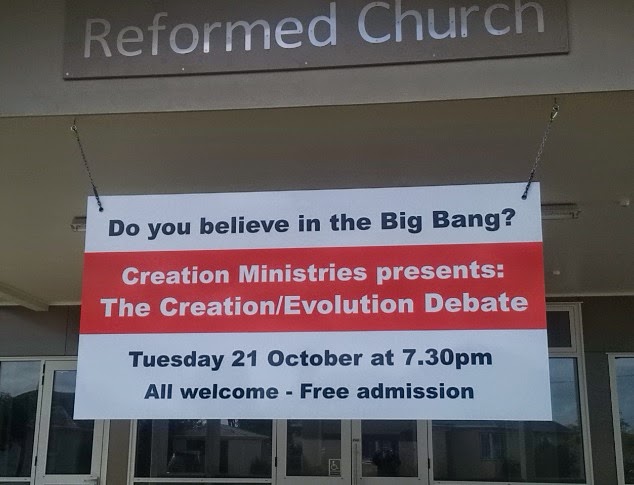 Spotted today in the suburbs. The local Reformed Church proudly proclaims its ignorance of science.

Reformed Christians come in two main varieties. Presbyterians  are the most common in these parts, their Calvinism being strained through a Scottish sieve. Generally these folk are relatively innocuous, though the New Zealand church is increasingly taking on a more conservative position as those with 'get up and go' get up and go. Recent reversals on social issues indicate an ageing membership corralled by Rotarians and National Party electorate committee members.

The Reformed Churches of NZ seem to provide a safe haven for strict Calvinists, home-schoolers, and members of the white South African diaspora.

Though the word 'debate' is used on the sign, I doubt whether there'll be anyone there to defend a non-creationist perspective. Notable too is that there is no speaker's name provided. I guess they'll dredge up one of the regular guys on the apologetics circuit. Whoever it is will be preaching to the choir; it's hard to imagine anyone other than the already convinced turning up. This is one battle that is well and truly lost.

Except in intellectual ghettoes like this.
Posted by Gavin R at 12:52