"For the advanced believer..."

Every week The Post, a local weekly newspaper, runs a column from a religious group with ties to the Adventist church. In the July 7 edition it begins with the words "For the advanced believer..."

Advanced believer? What does that mean?

Well, reading through the column it's pretty clear "advanced believers" should be wary of coercive governments and a coming "instant total Dictatorial vice grip control of everything."

Says who? The Bible proof texts give it away. The anonymous writer has been mainlining Daniel and Revelation, with an occasional puff on Matthew 24. 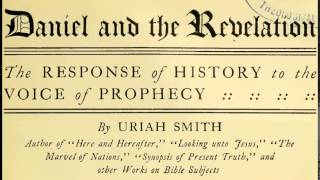 Lord save us from advanced belief!

Apparently there are at least three grades of believer in this gentleman's mind. First there are the simple believers. These dummies don't understand about the 2300 days of Daniel 8, and consequently the poor suckers are likely to lose their tenuous hold on salvation when the Pope makes Sunday worship compulsory - which is due any day now.

Then there are the advanced believers who read Adventist literature (such as his column and Smith's Daniel and the Revelation) naively.

Finally there are the super-duper genius believers - who are out there loudly muttering about the Third Angel's Message and ready to tell the Pope where to stick his communion wafers. Their overwhelming confidence is based on the work of 19th century dilettantes like good ol' Uriah.

Now I know there are some smart Adventists out there; people who would be genuinely embarrassed by this sort of moronic drivel. But you have to wonder all the same. While Uriah Smith may have some few detractors within the fold, he's still the Big Cheese over at adventistbookcenter.com


Written more than a century ago, this classic book has had an unrivaled influence on the understanding of prophecy. Originally distributed as a series of articles, and then as separate books about Daniel and Revelation, these writings were combined into one book in the late 19th century and sold door-to-door. Remarkably, Uriah Smith's interpretation of prophecy has borne the test of time and is as highly regarded and relevant today as it was years ago. With wisdom and clarity Smith explores the symbols, meaning, and significance of the biblical prophecies and causes readers to trust the sure Word of God. Join the long line of believers who have studied this work, discovered God's leading in earth's story, and look forward to the triumphant finale of the prophecies of Daniel and the Revelation.

Bullgeschichte.
Posted by Gavin R at 14:53