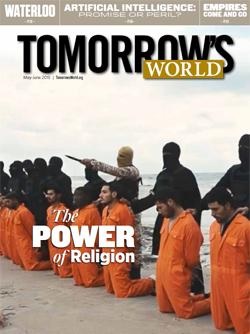 The May-June issue of Tomorrow's World, published by Roderick Meredith's Living Church of God, raised more than a few eyebrows. Fighters for ISIL (ISIS) were pictured with prisoners in a context that implied imminent execution.

Apocalyptic sects like LCG have exploited bad news for decades in an attempt to shoehorn current world events into their fantasy scenario, the return of Jesus Christ "very soon" to solve all our problems. In short it's about the "True Believer and the Terrible, Horrible, No Good, Very Bad Age" (with apologies to Judith Viorst.)

This time they scored a stronger reaction than they anticipated, leading to a statement of regret in the current issue.


Editor’s Note:  A number of readers have commented on the cover of our May-June 2015 issue. Some ... objected to it, for a variety of reasons. Some told us that the cover showed a staged provocation by antiAmerican terrorists, which because it was staged should not have been publicized.  Others took for granted that the cover showed an authentic event, but said they did not want the Tomorrow’s World magazine to make them think about the gruesome events that likely followed in the moments after the cover image.

Well, the first question relates to whether the photograph was staged or authentic. The attribution on page 31 reads "Cover: News Pictures / Polaris/Newscom". Whether "staged" or not, the picture indeed seems authentic. Real terrorists, real prisoners. How many of these victims do you think are still alive today? Now comes the justification.


One cannot read Scripture carefully and avoid the unpleasant subject of beheadings; Revelation 20:4 indicates that some Christians will be beheaded for their testimony, and Scripture documents the beheadings of Goliath (1 Samuel 17:51) and John the Baptist (Matthew 14:10).

Ancient literature is full of inhuman acts with little sense of outrage (unless, of course, it's happening to the group suffering the violence). There was no modern sense of human rights or dignity of the individual. This seems a poor justification. The statement concludes:


Even so, the purpose of this magazine is not to shock readers for shock’s sake. Rather, we strive to analyze world events plainly and honestly in light of Bible prophecy. As such, we certainly regret any upset or offense our May-June 2015 cover may have caused some readers.

Which just goes to show that movements like LCG really do have to take public opinion into account, especially when readers and viewers might react by cutting off financial support in response to an ill-judged decision. Tomorrow's World is not a news magazine. It's purpose is not to report but to exploit; to promote it's fear-ridden eschatology.

And this time it took a major pratfall.
Posted by Gavin R at 12:21