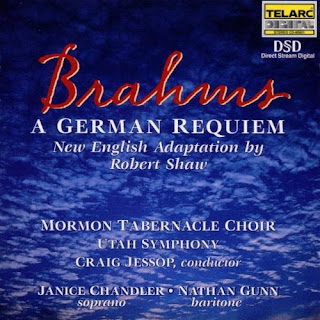 Classical music lovers - of which I count myself one of the lesser in sophistication - tend to have a "personal canon" of composers and compositions which press their buttons. Amongst my own "top 100" I've a special place for Brahms' Ein deutsches Requiem. Until recently however, I'd not heard it sung in English.

Wandering through Marbecks in Queen's Arcade - which every Aucklander should do once in a while - I stumbled on a 1999 recording on the Telarc label, an adaptation by the late Robert Shaw. It was on the 'specials' table, so being a fan (and always fond of a bargain) I was led astray.

There's an argument that Ein deutsches Requiem should only be sung in German, just like Italian opera is only supposed to be authentic in Italian. It's a position that can certainly be argued. The reviewer at Classics Today notes; "There’s no great English substitute for the sheer phonetic power of “Denn alles Fleisch, es ist wie Gras” in the context of Brahms’ setting; and how do you compare the hair-raising force of “zu der Zeit der letzten Posaune” with “at the sound, the sound of the trumpet”?

Fair enough. I wouldn't trade in my German recordings, but to hear it in English - without the need to mentally translate (or consult the liner notes) - certainly gives it a new focus.

Brahms' Requiem sets aside the traditional, and somewhat depressing, Catholic formula for texts from Luther's Bible and (in a couple of places) the Deuterocanonicals. Not exactly the ideal Lutheran - Brahms was more of a humanist - he created a masterpiece that not only defied the conventions of his age, but touched on the theme of death with subtexts that affirmed rather than awed.

The Shaw version uses the King James texts in place of "the inspired German" - no mean feat. This recording harnesses the forces of the Utah Symphony and the Mormon Tabernacle Choir. The notes in the booklet are pretty naive, but that doesn't affect the impact of the performance.

In an age in which we don't much like to consider the transitory nature of our existence, Brahms' Requiem speaks a word of challenge. How do you manage to crack the consumer-driven veneer to do that? Ancient writings are a terrible (or, to use the Kiwi vernacular, "bloody awful") source for dogma and doctrine, but they nonetheless are capable of capturing some pretty basic human insights, something the non-religious Brahms well understood. The words (text) are one thing, the tone of the work is another. Perhaps having had my own little "health adventure" in recent days has fine tuned my appreciation of such things.


Behold, all flesh is as the grass,
and all the glory of mankind is as the flower of grass.
For lo, the grass withers, and the flower thereof is fallen.
(1 Peter 1:24)

Lord, make me to know the measure of my days on earth,
that my life is but frailty, and I must perish.
(Psalm 39:4)

It sounds like a downer, but it's not. This requiem, like the very different work by Gabriel Faure, is a work of ultimate assurance and confidence. What's not to like?
Posted by Gavin R at 16:57