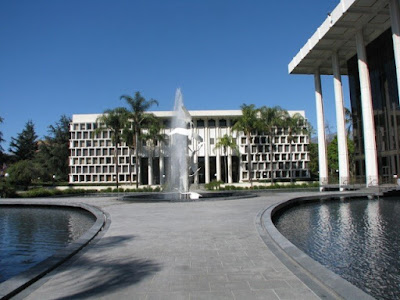 Demolishing a dream - farewell to Ambassador College's Hall of Administration.


As part of a planned multi-year redevelopment of the former Ambassador College campus, the Hall of Administration is scheduled for controlled demolition between July and September, 2015.  During preparation and throughout the demolition process, requests to film at this 4-story office building will be entertained on a case-by-case basis.  This is a unique opportunity for production companies to film scenes which might require such scripted elements as: explosive pyrotechnics, controlled burns, interior simulated gunfire, vehicle crashes, demolition and/or other types of sfx and stunt sequences.


Fireworks as the WCG's Vatican goes up in an apocalyptic B-grade movie end worthy of a Basil Wolverton scenario. 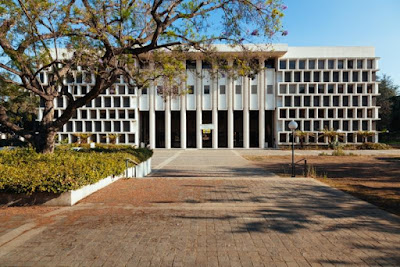 Gary Leonard, who knows whereof he speaks, details the colourful unofficial history of the building.

Rather than a Bible passage in tribute, perhaps a reference to Shelley's Ozymandias poem is not inappropriate...


I met a traveller from an antique land

Who said: Two vast and trunkless legs of stone

Stand in the desert. Near them on the sand,

Half sunk, a shatter'd visage lies, whose frown

And wrinkled lip and sneer of cold command

Tell that its sculptor well those passions read

Which yet survive, stamp'd on these lifeless things,

The hand that mock'd them and the heart that fed.

And on the pedestal these words appear:

"My name is Ozymandias, king of kings:

Look on my works, ye Mighty, and despair!"

Nothing beside remains: round the decay

Of that colossal wreck, boundless and bare,

The lone and level sands stretch far away.