I agree with Jim West - almost

Jim West is the Grumpy Old Man of bibliobloggers, no contest (and I say that as a qualified grump myself). He doesn't like so many things; emergent Christianity, N. T. Wright, accredited universities, Universalists, 'Pentebabblists', marriage equality, dissenters from an every-Sunday-pew-potato role, Texas... the list goes on and on.

And of course he's wright - oops, I mean right - about some of these things (on the above sample list I score him 3/8). More often than not these days, though, he simply seems to be venting like the bar flies who sit around at the pub pontifically grizzling about the sad state of life in general.

But today I found myself uttering an 'amen', sort of, to one of his latest posts. 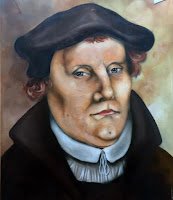 It’s time to abandon it [the term evangelical] as an utterly meaningless Rorschach / Chameleon like word which only takes on the appearance of its surroundings.  It CERTAINLY no longer means what Luther meant when he called himself and other protesters ‘Evangelische’.  There are virtually no Evangelische among American ‘Evangelicals’ because rather than protesting against heresy and embracing the Gospel, they have abandoned the Gospel and embraced the world.

He had me all the way through to the word 'because', when he went all Southern Baptist.

I've commented before on the misuse of the word 'evangelical'  - rampant throughout the English-speaking world. It's a battle the ELCA (which does know what the word means) joined - without notable effect - when it included the word in it's name.

To see it now as the assumed sole possession of the fruitcake fringe is terribly sad.
Posted by Gavin R at 13:21