The Journal - the Curate's Egg issue 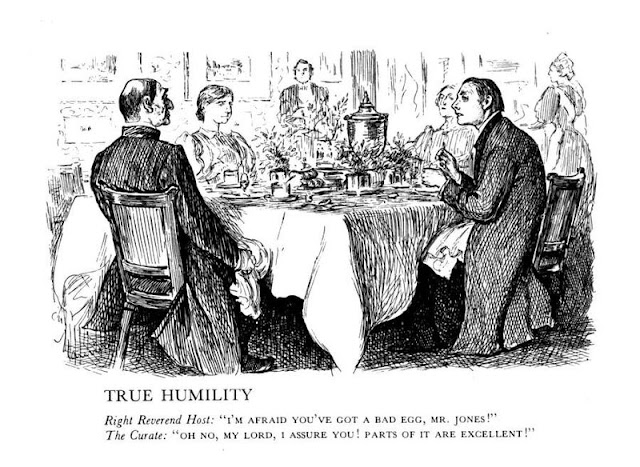 The expression "the curate's egg" is believed to date from an issue of the satirical magazine Punch in 1895. A curate is served a bad egg (on toast?) for breakfast by the bishop. Ever the diplomat, the curate remarks that "parts of it are excellent."

Which brings us once again to the 175th issue of The Journal. Parts of it are indeed excellent.

A reprint of a 1996 article (appearing in In Transition) by the late Gary Fakhoury exposes the Achilles heel of the Tkach reforms. I hadn't read this when it first appeared, but even now I feel some sympathy, at least in broad outline. Fakhoury raised important questions and the cabal simply obfuscated and prevaricated. Their position was never based on scripture.

While it's now all history, in '96 it was very much an alive issue. The self appointed, self entitled leadership bulldozed through change in doctrine without any accountability and at huge human cost. Reasonable people like Fakhoury - multiple thousands of them - were completely frozen out of the process, ignored, sidelined, by a smug pseudo-evangelicalism that brooked no systemic change in hierarchic structure, and absolved itself from acquiring any mandate.

Phil Arnold resurrects the hoary old chestnut, what did the 'W' in Herb Armstrong's name mean? He goes with the official version - Herb just added it in for effect - and has a personal story that confirms it. I'm still a bit sceptical. Back in the early seventies the Australian church magazine The Lutheran ran a major article entitled "The Spiritual Wilderness of Herbert William Armstrong." Where did they get that little gem of detail from? Who knows? There are other alternatives that have been tossed around over the years, some credible, some simply mischievous. On balance the meaningless 'W' is probably the most likely explanation, but hey, the guy was a compulsive liar on most things autobiographical, so the case is probably still open - as if anyone cares. More to the point brethren, what does the 'C' in Roderick C. Meredith stand for?

Reg Killingley slams an ad in the previous issue from the Obedient Church of God which refers to the head of the Catholic Church as "the Poop".


Perhaps you could ask advertisers to follow basic rules of protocol in referring to others in their ads. They can disagree with someone all they want but the payment of money should not be used as a license for puerile disrespect.

Sage advice. Sadly, as noted in the previous posting, the anonymous moron responsible for writing that ad is back again this month with something equally as grubby and offensive.

Ken Westby, one of the "bad boys" of "the 1974 Rebellion" has an intriguing article entitled Splits happen, even to one true churches.


They called me “the devil” back in 1974. Well, maybe not the devil or the Satan, but a bad hombre under devilish influence. I was accused of being used by the Prince of Darkness to attack “the church,” to cause a split.


Big church splits, firings and purges produce strange phenomena. One day the church has loyal, faithful employees, effective and good-hearted ministers; the next day these same individuals are evil plotters, disloyal dissenters, snakes, inciters to rebellion (which, you must remember, is akin to witchcraft), attackers of the [One True Church] and the poor innocent brethren within, etc., etc.

Well worth the reading. You can download the PDF of the entire issue here.

It's for material like this - as well as the nostalgia kick - that I still read The Journal. It portrays all sides of the ongoing COG experience as it meanders down the path to its inevitable terminus; the outrageous and the considered both. Thanks Dixon.