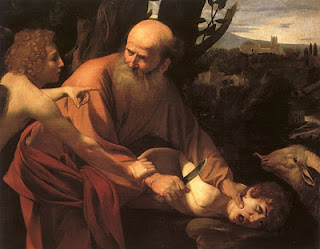 The second episode of the Channel 4 series The Bible: A History screened tonight on SBS1.  Hosted by Al-Jazeera's Rageh Omaar, it was less about Abraham, as claimed, as about the current parlous state of relations between the so-called 'children of Abraham' in Palestine.

The ruins of Abram's 'Ur of the Chaldees' provided one of the memorable images of the programme, sited next to an American military base in occupied Iraq.  Dr. Francesca Stavrakopoulou provided the bare bones of a critical commentary.


All scholars agree that the biblical stories about Abraham were written several centuries after the period they seek to describe, and many scholars now pinpoint the time of composition to the period of the exile in the sixth century BC, when the Israelites were conquered by the Babylonians, and their elites and religious leaders were taken captive to Babylon in Mesopotamia.

It's worth remembering that Abraham is thought to have lived around 1850 BCE. So how much reliable historical information about him can the Bible convey, bearing in mind that it took another forty five generations or so before the stories we now have about Abraham were first written down? That's a question Omaar didn't broach.

According to those stories Abraham was willing to kill both his sons, Ishmael (by sending him along with his mother out into the desert to die) and Isaac (as a human sacrifice to Yahweh).  This willingness was counted as a virtue!  It's a single-minded fanaticism that resonates to this day with extremists on both sides of the Jewish Palestinian divide.

Next week that old bat, British Conservative MP Ann Widdecombe, sets out to sing the praises of the Ten Commandments. But, judging from the promo, she gets a well-deserved earful from Stephen Fry.  That I'm looking forward to!
Posted by Gavin R at 22:37