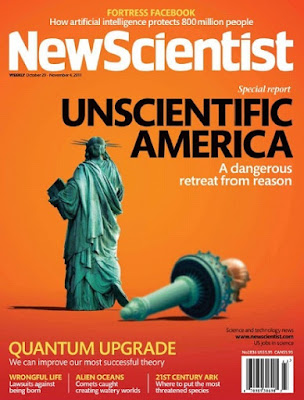 The words of the prophets are written, not just on the subway walls, but in the pages of the October 29 New Scientist. In a keynote piece Shaun Lawrence Otto laments the intellectual rot that underlies the anti-science discourse popularised by blowhards like Michele Bachman (a woman raised in the highly anti-intellectual tradition of Wisconsin Synod Lutheranism.) Why does the anti-science lobby have so much undeserved influence?


"Relieved [after WW2] of the burden of selling the value of their research to philanthropists, scientists turned inward and in many ways withdrew from public engagement. University tenure programmes were developed that rewarded research and publication but not public outreach. Scientists who did reach out to the public were often viewed poorly by their peers."

But his observations ring true in other fields as well. Replace the word 'scientists' with 'theologians' and behold, the ring of truth. Think of the snotty reception given to Karen Armstrong, Jack Spong, Bart Ehrman and other superb communicators by their disdainful critics cossetted within the academy.


"Withdrawing from the [public] conversation cedes these discussions to opponents, which is exactly what happened."


"Postmodernism emerged, drawing on cultural anthropology and relativity to argue that there was no such thing as objective truth. Science was simply the cultural expression of western white men and had no greater claim to the truth than the 'truths' of women and minorities... Many positive things came out of postmodernism but the idea that there is no objective truth is just plain wrong... Without objective truth, all arguments become rhetorical. We are either paralysed in endless debate or we must resort to brute authority."

Again, Otto is talking about science and the challenge of pestiferous delusions - homeopathy springs to mind, though it isn't mentioned - that petulantly demand equal treatment. One of the last theology papers I took was laced with this nonsense. A Bible passage can mean many things, nobody needs to be wrong, we can take what we like from the text and, even if it's completely unrelated to the author's (or redactor's) intentions, that's perfectly okay, the historical-critical approach is so yesterday, blather, blather, blather. Back to Otto:


"A generation of journalists with a postmodern education decided that 'objective' reporting was simply getting varying views of the story, but not taking a position on which represented reality... This [gave] undue exposure to extreme views - a situation that has been compounded by the elimination of most science and investigative reporters from cash-strapped newsrooms."

Creationism has no more legitimate place debating science in the fields of biology and anthropology than any of the origin myths of indigenous cultures. The uninformed, undereducated, lazily anti-intellectual 'pastor' of a 'Bible Church' has no more credibility is expounding scripture than an enthusiastic plumber who has been reading too many copies of Watchtower in his down time, no matter how impressively he struts on stage.


"With every step away from reason and into ideology, the country moves toward a state of tyranny in which public policy comes to be based not on knowledge, but on the most loudly voiced opinions."