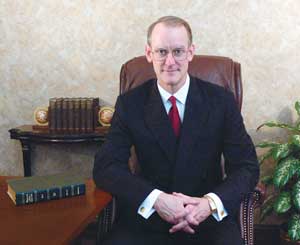 At an age when he should have long since retired gracefully, and donned sackcloth and ashes in an act of repentance for being an arrogant ass, David C. Pack is still living an Armstrongist wet-dream. The supreme leader of his very own high demand micro-sect, the Restored Church of God, the Packatollah has announced big plans to erect a glittering World Headquarters for himself in Wadsworth, Ohio. You'd think a man of his mediocre talent would settle for a nice set of business cards. Though he is apparently a highly driven character, Pack seems incapable of originality, so it's no surprise that his Great Erection is a blatant clone of the now defunct Worldwide Church of God HQ in Pasadena, complete with ersatz auditorium. Anything Gerry Flurry can copy, Pack can do too.

Mind you, it's all ostentatious intentions at the moment. Where will the moolah come from with such a modest tithe-base? Details, details. Construction is to begin in April next year, and the doors will open for gloating just twelve months later. Uh, okay.

Aging egomaniacs obviously have this thing about building monuments to themselves. But will the Packatollah even get that far? The PR blather indicates that it's a done deal, but the only certainty may be that the demands for special offerings will now flood out to the RCG's long-suffering membership.

(Thanks to Gary who, as usual, has the blog scoop on this latest story from the farthest fringe.)
Posted by Gavin R at 21:57