I've been slowly working my way through Ben Mitchell's The Last Great Day. It's a novel, "based on a true story." Mitchell grew up as a PK (pastor's kid) in the Worldwide Church of God. Despite some tinkering with names (Armstrong morphs to Abraham etc.) it's recognizably the movement many of us once knew and loved - even if the verb has now changed to loathe.

Chapter 23 tells the tale of a trip on board the Apostle's Gulf Stream II. The time setting is shortly after the release of David Robinson's book Herbert Armstrong's Tangled Web, and rumours are spreading like wildfire. It's a time I remember particularly well, having acquired one of the few early copies - and a signed one at that - to reach the shores of New Zealand. In the story, Abraham (Armstrong) while visiting his Australian operation, has invited the none-too-bright minister Henry Conroy, along with his wife Elizabeth, for a joy ride over Perth in the GII. Henry is invited to sit in the cockpit with the pilot - a great privilege - leaving Elizabeth alone with the old goat.

What happen's next? The Apostle lays hands on the hapless Elizabeth.


"Why did you lock the cockpit door?" asked Elizabeth. "Isn't it dangerous? What if they need to tell us something or ask you about our destination?" Abraham sat next to Elizabeth, putting his hand on her knee.

"We are all going to the same place, my child." He skulled his Scotch, running his eyes over Elizabeth's legs as he did... Abraham looked in her eyes, with his ferocious and full of single-minded intent.

"There is no need to be alarmed, my child. In the coming Kingdom of God, all our fears and sins will be forgiven. We are what we are, as God made us, Elizabeth."

"And as God told us through Paul, wives should submit to their husbands only," said Elizabeth, holding the full glass of Scotch with both hands - some kind of pathetic barrier between them...

Well, you get the idea. Slimeball Abraham's ardour is doused when Elizabeth drops the glass, which breaks, and Henry rattles the locked door. The saddest line in the chapter is Elizabeth's, and appears toward the end.


In her mind she repeatedly asked herself the same question: How did I lead him on? 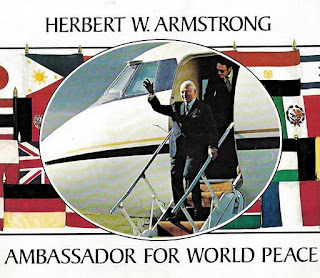 Now, okay, this is fiction. But there's a clear autobiographical and family history element in the text; Henry and Elizabeth are closely modelled on Ben's parents. So, one has to wonder whether the incident isn't as far fetched as it sounds. In many ways Herb Armstrong profited from his son's hugely profligate reputation, a barrier that deflected concerns away from himself. In the real world, at this time, there were indeed dark rumours about Herb's own moral choices, particularly when the Apostle was away on his boozy globetrotting sprees with Stan Rader and Osamu Gotoh. Those old enough to have followed the scandal at the time will remember stories about the 'flog log', the dildo in the Hermes pouch, the lusty junior members of the Japanese diet (Herb's 'Japanese sons') who 'partied hearty' on the GII, the stay-over at the Romanian sex clinic... and on it goes.

Maybe Mitchell has conflated Herb and Ted (Garner Ted Armstrong). After all, none of this would surprise us if it was Ted who was portrayed as trying his luck - the evidence about his 'mile high' behaviour is undeniable. But perhaps, like father like son... The man is no longer available to defend himself of course, but then when he was available to defend himself against the allegations in Robinson's book - and from his son - he said nothing. Not even when the allegations turned to incest.

It was Phillip Adams who may have provided the most apt epitaph for Armstrong, writing in the Weekend Australian Magazine in February 1986.


It must come as a great shock to both of them, but Herbert W. Armstrong and L. Ron Hubbard are dead. These god-like gurus, who dominated the lives of countless disciples, have carked it, snuffed it and kicked the bucket. And the world is a better place for their passing.

Mitchell's book brings back none-too-pleasant memories. But then, those who ignore the past are most certainly condemned to repeat it.

(Outside Australia Mitchell's book is available from Amazon in a Kindle edition.)
Posted by Gavin R at 12:23