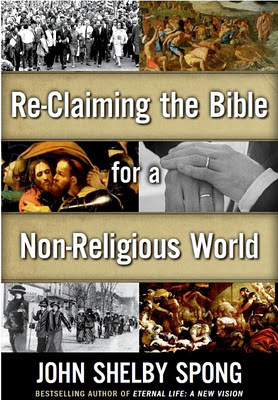 Fundamentalists are no fans of Jack Spong. No surprise there. But nor are many professionals in the field of biblical studies. It's an interesting phenomenon. Spong writes books that (grind teeth) make sense to ordinary, educated folk. He doesn't use too much jargon and - the unforgivable sin - he sells!

Here in New Zealand Lloyd Geering, undoubtedly the most honest theologian of note the country has ever produced, is treated with similar ambivalence. A prophet without honour in certain academic ghettos within easy driving distance of Dunedin's octagon.

But back to Spong. His latest book is out: Re-claiming the Bible for a Non-Religious World. It's a Bible 101 survey for those who are curious. It's not a dry textbook, and there's nothing particularly original in it for those who are well read in the field. But for laypeople, starved of real information in their churches (whether evangelical or mainstream) it could well be revelatory. "Why" asks Spong "is this scholarship not communicated to the Sunday worshipers of the world?"

It's a great question.


"Moses did not write the documents we call the 'books of Moses,' or the Torah (Genesis to Deuteronomy)! Indeed, Moses had been dead some three hundred years before the first word of the Torah was put into written form. David did not write the book of Psalms! Solomon did not write Proverbs! The gospels were not written by eyewitnesses, but by at least the second and, in the case of the Fourth Gospel (as the book of John is often called), perhaps even the third generation of believers. The book of Revelation does not predict the end of the world or convey any hidden messages about modern-day history! Why do we still allow ourselves to be tyrannized by this kind of uninformed biblical non-sense, regardless of the 'authority' claimed for that book by the mouths that still utter these claims?"

Beats me. But again, great questions.


"Religious leaders seem to believe that if they allow one crack in their carefully constructed religious or biblical defense system, then the whole thing will collapse in ruins. That is the stance of hysteria, not the stance of either faith or hope, though it masquerades as both."

The real scandal, I sometimes think, is that the seminaries and university theology faculties so often serve as enablers to this policy of avoidance. Many (most?) of those recruited into the hallowed halls of the enlightened clutch their knowledge to their own breasts, wallowing almost altruistically in their own doubts, content to themselves know in an almost gnostic fashion what the great unwashed must not.

I hope Re-claiming is widely read.

Especially in Dunedin.
Posted by Gavin R at 19:55