Birds of a feather? 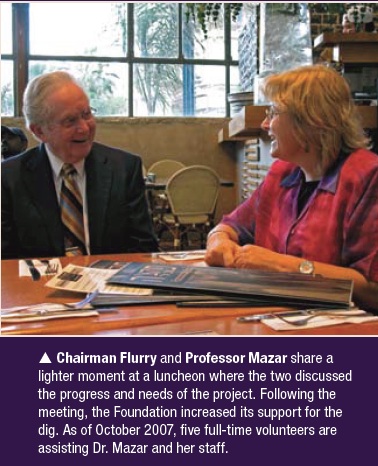 The world has moved on from the days when 'biblical archaeologists', "Bible in one hand, spade in the other", went forth to prove that the Good Book told it just as it was. Oh but the temptation is still there, especially when American evangelists with deep pockets want to throw money at a cause they can profit from.

Which is why Gerry 'Six Pack' Flurry, 'Pastor Generalissimo' and self-proclaimed Prophet of the bizarre high-demand sect the Philadelphia Church of God is such a big fan of Eilat Mazar and other suitably cooperative figures in the Israeli archaeological establishment, sending students from his unaccredited college to dig the dirt for her in Israel.

And why she is praised by Hershel Shanks, editor of Biblical Archaeology Review, and gets positive press from conservative evangelical magazine Christianity Today in a current feature.

But there's a chill wind blowing out of Petros, Tennessee. Jim West's comments on Mazar's work are a valuable corrective for anyone tempted to take the gushy PR at face value. Do check it out.

To redact a comment of Jim's: That Flurry is among Mazar’s supporters says everything that needs to be said.