Creation - steering between the absolutists 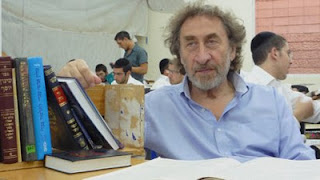 Some time back Britain's Channel 4 screened a series called Christianity: A History. It seems they have brought most of the old team back to produce a sequel, The Bible: A History. The first episode screened tonight on Australia's SBS.

This initial programme featured Howard Jacobson, retreaded from the first series, investigating the profound significance of the Genesis creation story. I say 'profound', because that's the lens Jacobson, a secular Jew, views it through. His self-appointed task; to steer a path between fundamentalism and atheism, to confront the absolutists on both sides of the divide. We need, pleads Jacobson, a more sophisticated approach to embrace the enchantment of the creation story.

A string of talking heads are trotted out, as they usually are in this sort of doco, to illustrate the script. Britain's chief rabbi, Lord Sacks, is among them, along with A. C. Grayling, John Polkinghorne and Mary Midgley (among others). We learn that Genesis wasn't written by Moses (shock, horror!) but first surfaced in the wake of Israel's return from exile in the eighth century BCE. We sit in on a mock Sabbath celebration with Howard Jacobson's orthodox relatives for whom the creation account is far beyond the slings and arrows of outrageous reason, and sit through an interview with a English creationist pastor who claims science is on his side.

Jacobson is buying none of the literalism, but neither is he giving ground to the rationalism of thinkers like Richard Dawkins. The first chapters of Genesis have engendered beautiful literature and music. They are to be appreciated, like Shakespeare, on the level of poetry and the power of myth.

I'd agree. In fact I do agree. But. But isn't this also a particularly vapid bit of elitist waffle? Isn't its appeal limited to a small, privileged minority? A small minority already comfortably predisposed to such things? Would it have impressed the fishers of Galilee or the sometimes fanatical Christians of the second generation, many of whom were slaves and few of which were literate? What indeed does make Genesis qualitatively different, on this account, from Shakespeare or Gilgamesh, the Brothers Grimm or Homer? No surprise that intellectuals are the ones to embrace this nuanced approach to creation, but that it has little appeal in the real world.

Is this the best we can all agree on now? And if it is, hasn't Dawkins actually got a stronger case to make?

Dunno. Next week Rageh Omar (also back from series one) goes hunting for Abraham. I hope he has better luck than Howard.

(An interview with Howard Jacobson can be found on the Channel 4 website.)
Posted by Gavin R at 23:20