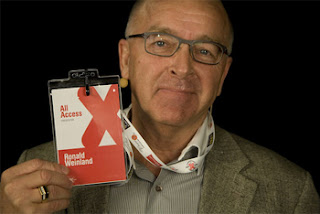 A nod to Gary who has linked to a Cincinnati news source reporting the great tribulations of Ronnie Weinland who, along with his lovely wife Laura, are - in case you didn't know it - the Two Witnesses of the Book of Revelation.

Many are the afflictions of the righteous, and Ronnie, a entrepreneurial (tithe farming) disciple of the late Herb Armstrong, has had more than his fair share. You might find this hard to believe, but Ron - author of 2008: God's Final Witness - has had a teeny credibility problem after repeatedly getting his End Times predictions wrong. Harold Camping has company!

And now he faces five years of incarceration - being thrown in the slammer - for tax evasion. It seems God's special little bloke has an undeclared Swiss bank account. Here's the item.


COVINGTON – A Northern Kentucky man who prophesies about the end of the time through an Internet-based ministry was indicted by a federal grand jury Thursday on five counts of tax evasion.

The minister understated his income, used church money for personal expenses and tried to hide the existence of a Swiss bank account, said a spokesman for Kerry B. Harvey, the U.S. Attorney for the Eastern District of Kentucky. Weinland also allegedly failed to report any interest made on that Swiss account as income.

Weinland, who couldn’t be reached Thursday evening for comment, faces up to five years in prison if found guilty. The date of his arraignment at the federal courthouse in Covington was not immediately available.

He is the minister for Church of God – Preparing for the Kingdom of God, according to the indictment. The church’s website lists a Cincinnati post office box and an AOL email address. There is no phone number listed for the church in the Boone County phone book.

The church’s website predicts the return of Jesus Christ on May 27, 2012. Weinland’s weekly audiocast can be heard on the website every Saturday afternoon. The website states Weinland speaks to his congregation from different locations across the nation via the audiocasts.

In addition to visiting various scattered congregations in the United States, Weinland and his wife, Laura, also travel to Australia, New Zealand, Canada, and Europe, according to the website.

“He does this to warn and prepare people for what lies ahead in the traumatic events that will unfold over the few remaining years of this prophetic end-time,” the website states.

But not to worry, time is on Witless Witness Weinland's side. Here's a recent quote from the prophet (another nod to Gary, who follows these things far more closely than I do these days). 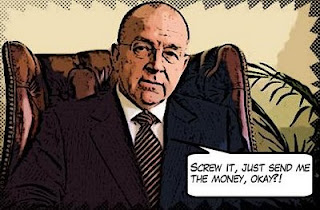 In two short months, the world will be thrust into the seventh and final phase of this end-time. This period will be marked by well over fifty percent of all Bible prophecy being fulfilled.

God first revealed to His two end-time witnesses [Ronnie and Laura], His final two prophets that His Son would return to this earth in a second-coming as King of kings on May 27, 2012. That revelation gave way to numerous other revelations concerning end-time prophetic events. But anyone who hears of this, in the world or in the Church that was scattered, considers this to be absurd, presumptuous, arrogant, and filled with self- aggrandizement.

Oh surely not! Not Ronnie! Absurd, presumptious, arrogant, filled with cr*p?  Unimaginable!  Nor that Ron is a lover of mammon and a tax cheat.  It just ain't so!  Just you wait, all you doubters, till May 27 next year, so there!
Posted by Gavin R at 18:10