Ted says something that makes sense! 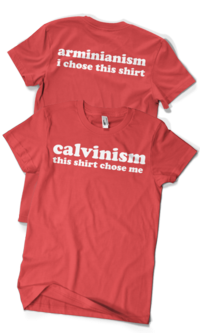 I don't often agree with Ted Johnston over at The Surprising God blog.

In fact, I don't think I've ever found anything Ted has written that I cared to take seriously.

But here's the exception that proves the rule. The dumb idea that Christians must be either Calvinist or Arminian. Ted debunks that rather stupid notion thusly:

Unfortunately, some try to force-fit Trinitarian theology into the continuum that exists between Calvinism  and Arminianism. Doing so overlooks (or at least oversimplifies) the history of Christian theology, which goes back to the Apostles and from there flows in multiple streams, including Orthodox streams in the East; and Catholic, Reformed, Lutheran, Anglican, Episcopal and other streams in the West.

Contrary to common misunderstandings held by some (many?) Western Protestants, Calvinism and Arminianism are not the only theological "games in town." Trying to locate Trinitarian theology within the continuum between those dueling [sic] theologies is like trying to force the proverbial square peg into a round hole. The result, often, is badly misinformed criticism of Trinitarian theology.

In a recent post on The Gospel Coalition (TGC) blog, Trinity Evangelical Divinity School (TEDS) professor Douglas Sweeney showed how trying to fit Lutheran theology into the Calvinist-Arminian continuum is a similar mistake. He concludes the blog post, titled "Was Luther a Calvinist?" with these words:

There are, of course, similarities between all Christian theologies. Trinitarian theology does have common ground with Calvinism and Arminianism. But there are important differences. We do an injustice to all theologies when we try to force them into the grid of another. Instead, we should evaluate each one on its own merits, comparing it principally to the revelation of Jesus Christ himself.

Of course, predictably, Ted then goes off in the direction of Barth and Torrence, but that doesn't invalidate his initial comments, despite the fact that his use of the term "Trinitarian theology" in the posting - by which he means the distinctive dogmas that Grace Communion International now champions - is mildly sectarian. Granted that, I don't know how often people have insisted on shoehorning each and every variety of Christian belief into this myopic either or Calvinist Arminian construction. It's nice to see a contrary view stated with a measure of clarity.
Posted by Gavin R at 23:07