Eunuchs for the Kingdom 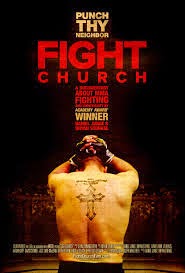 Every so often you come across an article that leaves you blinking and mildly astonished. Stephen Patterson's column in the current Biblical Archaeology Review (BAR) had just that effect on me. First, news that "Christian cage fighting is a trendy new phenomenon among some evangelical churches... men exchange brutal punches and kicks to the legs, torso or head until one or the other 'taps out,' that is, begs for mercy."

Then Patterson draws a line from this fine 'Christian' sport to male-on-male dominance in the Roman Empire. "Male penetration of another man was the quintessential  act of domination - think imperial 'prison sex,' not gay sex." Here's the explanation for all that phallic graffiti that adorns the ruins of Pompeii.

Now you might be wondering where this is all going. First a diversion back to Sodom. Those despicable Sodomites weren't "randy homosexuals out looking for a good time. They simply intended to put the outsiders [Lot's angelic visitors] in their proper place." 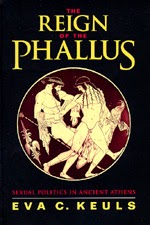 Okay, that makes a good deal of sense. Patterson now changes tack to fifth-century Athens, citing Eva Keuls' book The Reign of the Phallus in support. I've had this worthy academic tome on my bookshelf for a number of years (somewhat obscured in its placement lest anyone casually browsing the shelves come away with an entirely wrong impression).

Finally Patterson zeroes in on his intended text of the day - one I believe is absent from most Sunday lectionary readings; Matthew 19:11-12. This is the eunuch passage which concludes: there are eunuchs who have castrated themselves for the sake of the kingdom of heaven. Let anyone who can receive this, receive it."

Just a colourful metaphor for the virtues of sexual abstinence or celibacy? No, says Patterson, it means exactly what it says. This was apparently seen as one way to opt out of a brutally toxic culture. Cross reference Galatians 3:28 (neither male nor female) and 1 Corinthians 11:14-15 (on hair length). States Patterson: "Paul liked his men and women to look like men and women, but his Corinthian protégés had taken 'no longer men and women' to heart."

And though I hate to admit it, I think Patterson has made a convincing case. Anyone who has studied early Christianity knows it was pretty diverse (a handy euphemism for "occasionally weird") but apparently it could get weirder than many of us ever imagined.

Fancy a trip back to "Bible times"? I think not.

Speaking of weird, evangelical cage fighters (assuming any of them are actually able to read) please take note!
Posted by Gavin R at 14:15