It's hard to know where to begin with the latest issue of The Journal: News of the Churches of God, but what the heck, let's give it a go. 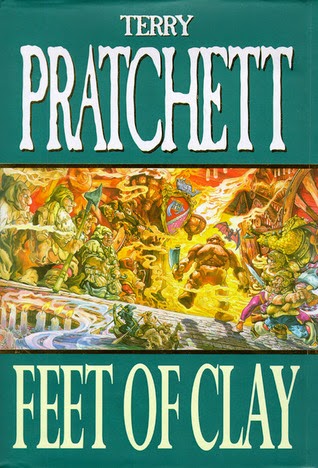 For Terry Prachett fans, news that the late fantasy writer and creator of the Discworld novels drew on The Plain Truth as inspiration for a fictional publication in his nineteenth book in the series, Feet of Clay. The magazine called Unadorned Facts was modelled on the PT.

And you'd have to concede that Feet of Clay is also a great title for anything that, even obliquely, relates to Herbert Armstrong and the gaggle of sects that still idolise him.

It is, incredibly, ten years since the Terry Ratzmann killings during LCG services in Milwaukee, Wisconsin. Several articles reflect on that event, including an essay written just two months after those terrible events by Robert Geiger, then just 12, who was sitting next to the youngest of Ratzmann's victims, Bart Oliver, aged 14.

Coverage also of an Ambassador College reunion held in Pasadena earlier this year. The organiser was Bob Gerringer who, if I'm not mistaken, was along with the late John Trechak, one of the founding editors of Ambassador Report. Some 400 were in attendance. Among the speakers was Wayne Cole whose "words were positive and healing." Nice to hear that Wayne, regarded as one of the "good guys" among WCG's former leadership, is still holding his own. How might things have been different if it was he who followed on as Pastor General from Armstrong?

(Perhaps in some alternate Discworld universe he did!)

The last instalment of John Warren's history of the WCG in East Texas appears in this issue, especially focusing around the explosive years of 1994/1995.

Dave Havir puts the buzz-phrase "servant leadership", much abused by the LCG, under the microscope. As always he's well worth reading.

I don't believe I've ever recommended one of the ads in the Connections section before, but there's a first time for everything I guess. Tina Engelbart has written a page-long essay entitled Did Paul Silence Women in Corinth? She's reacting to statements by Art Mokarow in a previous issue. While I'm not sure I'm completely convinced by Ms Engelbart's exegesis of the passages in 1 Corinthians, I'm glad someone is standing up to those officious dilettante preachers who so love to quote Paul to support their misogyny, but know so very little about his writings.

If all this sounds good, it's only fair to warn you that there are the usual less than insightful contributions as well. Australian engineer Mike Baran blows a righteous indignation valve discussing (kind of) the canon, and there are the rest of those Connections ads - one sponsored by something called The Obedient Church of God, Omak, Washington. You'd have thought these guys would have run out of naming options years ago.

You can find The Journal PDF here.
Posted by Gavin R at 18:18