On babies, screw-drivers and deck chairs 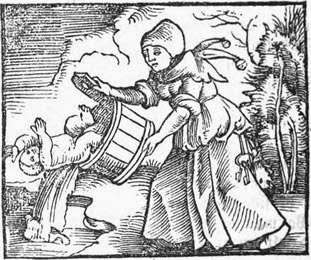 What do you do when long-held beliefs suddenly start to crumble under the impact of fresh information?

It's a situation that most of us have had to confront at one time or another. For some of us more than once.

One option is to go into denial. Get defensive, refuse to be pushed any further up the learning curve. Dig your toes in and circle the wagons, hallelujah! Growing is painful, make it stop!

I dare say we've all met people like that. The older you get the harder it is to go through a seismic shift in your world-view. You end up spending a lot of time and energy trying to convince yourself (usually while trying to convince others) that there's no problem.

Another option is to finesse your views. Take out a screw-driver and make a few adjustments. Look for the deeper significance. I confess that this has been my favoured approach over the years. Reject a vulgar literalism, for example, and  try to uncover the authentic values that lie "in, with and under" the problematic elements.

Then there are the "baby and bathwater" types. Out it all goes.

I was challenged on this a few days ago by something Hemant Mehta wrote. He was making the point that the Option 1 people - the example was Ted Cruz - are only succeeding in creating more Option 3 converts. To summarise the argument, more young people are distancing themselves from any form of Christianity because "they don't want to be part of a religion that does so much damage in our society. [The role of fundamentalist extremists is] to make them realize how awful their beliefs really are."

And that hit me between the eyes. True, nicht wahr? How do we expect young people (or even the occasional old coot) to bother with a nuanced, compassionate or progressive understanding of their inherited faith while all the noise is being made by lobotomised literalist preachers who advocate a gospel of judgement, fear and intolerance? The situation isn't helped by the congenital unwillingness of more sophisticated mainline Christians to distance themselves from the moralistic tithe-farmers who now loudly dominate public discourse on all things Christian.

And I wondered, if only for a fleeting moment, whether the "baby and bathwater" types had succeeded in cutting the Gordian knot while others like myself were fluffing around trying to shuffle deck chairs on the Titanic. Yeah I know, horrible mixed metaphor, but you get the idea.

I guess I'll stick with Option 2, but maybe I'll also be less critical of those who, in all good conscience, find Option 3 the only one they can really deal with.
Posted by Gavin R at 21:29