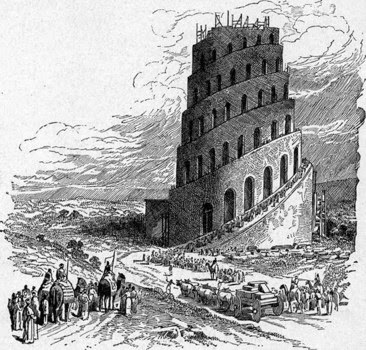 Paul over at Is That In The Bible? doesn't blog nearly enough, but when he does it's almost always worth the wait. Take his latest illustrated piece on the Tower of Babel as an example. What can one say? Comprehensive, informed... Dear lord, the man even provides a bibliography!

You've got to wonder how anyone, living as we all do in the early years of the twenty-first century, could take the Babel story literally. This is simply not the way languages developed. And yet lots of people still do. Not on linguistic or etymological grounds, but because "the Bible tells me so", and they take pride in "a simple faith".

While that may cause some of us to grind our teeth in frustration along with the editors of National Geographic (see their lead article in March: The War on Science), even worse in my opinion is the well-intended appropriation of the Babel story by more liberal Christians in an (ineffective) attempt to rescue it from irrelevance. Sure, there are universal themes in the narrative, just like there are universal themes in the Epic of Gilgamesh. But should the fact that the Babel story is in the biblical book of Genesis privilege it beyond similar tall tales in Greek and Near Eastern culture (or Far Eastern, African or Pacific culture for that matter!) Etiological stories (can be well say etiology together, brethren?) of necessity touch on basic themes, whether they're in Genesis or Rudyard Kipling's Just So Stories.

But I digress. Paul has put together an outstanding post on the Tower of Babel. Read it, then share it with a fundamentalist relative or acquaintance (oh the joy of being just a bit subversive).
Posted by Gavin R at 16:50