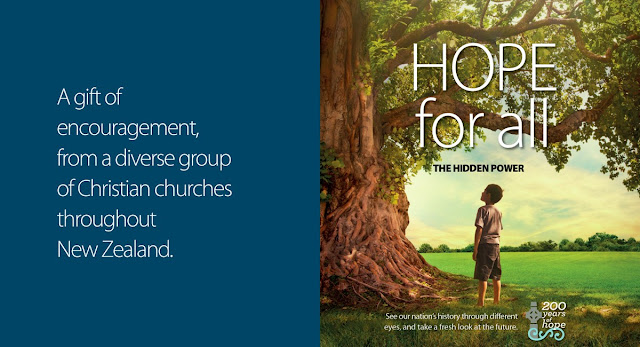 December 2014 marked 200 years of Christianity in New Zealand and the various churches got together to buy television advertising and launch print resources - specifically two booklets delivered a few months apart - into every letterbox in the country. The endeavour was called Hope Project.

These religious bodies included most of the major "Protestant" groups: Anglican, Wesleyan Methodist (not regular Methodist), Lutheran, Salvation Army, Vineyard, Elim, AOG, Congregational, New Life, Nazarene, Presbyterian and Baptist. The PR described these as a "broad based, main-stream organisations", though I'd raise an eyebrow at the suggestion that Elim, Vineyard, and the Assemblies of God are anything North of the nut-house. But hey, times are a changing.

Today I dug up booklet two, Hope For All: the Hidden Power, which has languished forgotten for a goodly time. On skimming through it my jaw dropped.

What I expected was a carefully worded little treatise that would offend no-one. With all these churches having a finger in the chalice I figured it would be a typical committee project, saying very little but with lashings of churchly wordiness. I expected cautious heads would moderate the content to deliver refined ambiguities. After all these two centuries begin with Anglicanism, the broadest of churches with sensibilities to match. Surely the end product would be vetted by the theological luminaries at places like St John's College in Meadowbank?

It would be great to link to a PDF of the booklet in question, but I can't find it online. To add to the problem the website is about as usefully navigable as a coracle in Cook Strait.

But, why let that get in the way. In next posting we'll have a look at this little gem, the self-proclaimed voice of "broad based, main-stream" Christianity, and consider its credibility.
Posted by Gavin R at 20:34