Isaac on the Altar 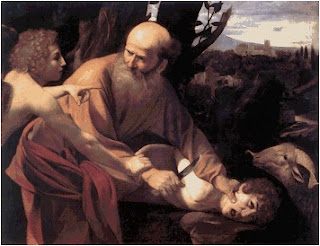 The Akeda is the story of the binding of Isaac. As you remember, God gives Abraham a directive to do something utterly unconscionable, to offer up his son as a sacrifice. You can find the story in Genesis 22. Nothing metaphorical; this involved wood, fire and a sharp knife.

It doesn't seem a particularly apt text for a Father's Day sermon, but that doesn't seem to have occurred to the preachers in the Laestadian Lutheran tradition. Ed Suominen quotes a couple of homiletic attempts to draw blood from this particular stone, and rips into the entire enterprise.


"This is scary stuff. It is the kind of thinking, of non-thinking, that is bringing us beheadings in Syria and floggings and amputations in Saudi Arabia."

Ed is a former Laestadian and author of the only (as far as I know) "go to" text that provides an insider perspective on this non-standard version of Finnish Lutheranism, An Examination of the Pearl.

Ed is a bit more direct than I would choose to be (he writes, for example, at the wryly-named Ed Suominen's Shitty Little Blog, which seems to be taking self-deprecation to its outer limits) but it's hard to ignore the force of his distaste for this tale from millennia past. To find redeeming meaning in Genesis 22 is akin to making the proverbial silk purse from a sow's ear. That hasn't, of course, stopped a mountain of related midrash and apologetic bumf from rising up over the centuries.

To which, one might suggest, Ed is playing the kid in the tale of The Emperor's New Clothes. Is there really anything salutary in this "faith story"? Is Abraham's obedience really something to hold up as an example of righteousness? Have a read through and decide for yourself.