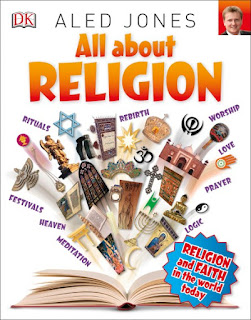 When Issac Asimov wanted to get the gist of a subject that was new to him, so the story goes, he headed for the children's section of his local library. If you're writing for kids you have to pare back the verbiage and express your ideas clearly. Kids aren't impressed by pretentious writing. Too bad we grow out of that. Asimov was onto something.

Now, just released this month, there's a DK title in the Penguin Random House stable that proves the point once again. It's called All About Religion, and it's a class act.

This illustrated large-format paperback isn't just about the Abrahamic faiths. Nor is there a whiff of apologetics. Atheism gets a fair treatment, and the approach taken is to open up the reader's thinking to the diversity that's out there. Given that it's under 100 pages and not text-dense, it does an amazing job of covering a lot of bases. Sikhs, Baha'i, Ninian Smart, the Nicene Creed, Sunni and Shia, yoga, Theravada and Mahayana, Mary Baker Eddy, Falun Gong, Feng shui, Humanism, Rationalism, Zoroastrian Towers of Silence, the hijab, Rastafarian dietary laws, Dawkins, Laozi... all get at least an introduction.

Aled Jones gets credit on the cover, but he actually just wrote the foreword. Jones first reached international fame as a boy soprano (his 1986 recording of Faure's Requiem with the Royal Philharmonic under Richard Hickox is still one of the best available) and went on to survive his stint as a child prodigy to pursue a career in British television and radio. We can all be grateful that Aled was in on the project and not N. T. Wright.

Being a kid's title - geared to smart 12-year-olds or thereabouts - it's not particularly expensive, and for most of us adults this is a great Religion 101, minus all the puffery.

Asimov would, I think, approve.