The End just got postponed

Ten minutes of nuclear Armageddon and lo, the return of Christ.  By today - yes, right now, if not hours past - we should all we witlessing witnessing the Second Coming - at least according to super-prophet Ronald Weinland.  But, oops, it seems the Weinland Messiah was double-booked. 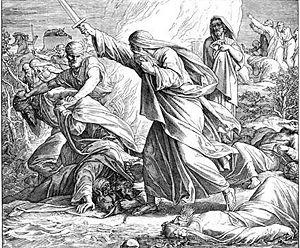 26 So they took the bull that was given them, prepared it, and called on the name of Baal from morning until noon, crying, "O Baal, answer us!" But there was no voice, and no answer. They limped about the altar that they had made. 27 At noon Elijah mocked them, saying, "Cry aloud! Surely he is a god; either he is meditating, or he has wandered away, or he is on a journey, or perhaps he is asleep and must be awakened." 28 Then they cried aloud and, as was their custom, they cut themselves with swords and lances until the blood gushed out over them. 29 As midday passed, they raved on until the time of the offering of the oblation, but there was no voice, no answer, and no response. (NRSV)


No voice, no answer, and no response.  Not so much as a stray trumpet blast.  Luckily for Ron, he won't have to face the same fate as the prophets of Baal, other than a little biblically-sanctioned mocking.

So how, after predicting the big date and failing, then re-predicting and falling flat on your face yet again, can you recover your dignity and keep on with gathering the Lord's greenbacks?

Ronnie lays his heart open before the brethren.  No sign though that he's going to retire from the prediction business.  Nope, he's already hard at work on that next rambling sermon.  Oh dear, and all that nasty IRS stuff will have to be dealt with after all.
Posted by Gavin R at 10:38