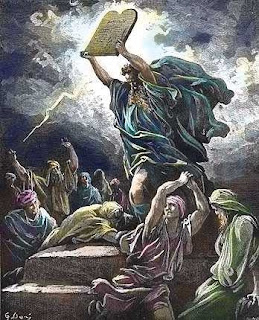 Tim Bulkeley says what I would have (if I'd had the energy) on the subject of Law vs. Law (kinda like Mad magazine's classic Spy vs. Spy), following a very Baptist posting on that subject by Jim West.


Those unable to or unwilling to recognize that moral law is one thing and ritual law another will never, in 100 lifetimes, grasp the biblical text.

As they say on the Tui billboards - Yeah, right! Methinks you'd need to borrow Joseph Smith's lost magic glasses to distinguish the two.  They're absolutely fused together in the Hebrew Bible (even within the Ten Commandments), if indeed they are even capable of being distinguished.  My former tradition has battled with this issue, often with far more heat than light produced.  Simply put, the distinction is anything but clear.  Not clear in the Old Testament, not clear in Paul's writings.  Especially not clear in Paul's writings, which is why Seventh-day Adventists can come up with such an interesting reading of Romans.

Enter Tim who is, I believe, also of the Baptist persuasion.


...what makes the treatment of disorderly conduct, or slaves civil law and something else moral law? It’s quite simple really. Moral law is about sex and civil law isn’t. 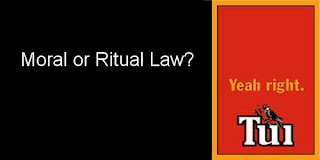 Uh... now I think Tim has his tongue somewhat wodged in his cheek with that comment, though I could be wrong.   I'm one of those weird types who believes morality has very little to do with sex as such.  (Faithfulness, compassion, integrity; yes.)  In any case, his overall point is well made.

Not to say a Christian position on ethics must be incoherent, but oh boy, is it necessarily nuanced!  So I respectfully disagree with Jim and, possibly, agree with Tim... which I'm sure will come as a surprise to him.

This whole oxymoronic issue of "Christian ethics" drives me nuts.  Blessed art thou if you've never so much as heard of Newbigin or Gunton!  Behaviour is either ethical or not, which should be totally clear to anyone who either (a) lives in a pluralistic Western nation or (b) deals with kids on a regular basis.  The Bible is of very limited help in teasing out the complexities of what is and isn't moral.

Some of the most moral people I know have eschewed traditional marriage vows.

Checklists are for supermarket shopping.
Posted by Gavin R at 18:24