The Most Disturbing Chapter 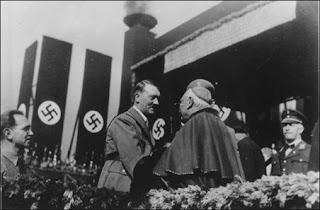 A few days ago there was a posting here that asked which passage in the Bible was most disturbing.  Most of the nominations involved horrendous Old Testament passages.  There's certainly a lot to object to in the Hebrew canon, not least the famous 'waters of Babylon' psalm, Ps. 137.

Perhaps the concentration camp staff at Auschwitz comforted themselves with such verses, but they would be the vilest exception.  Yet, in the context of other ancient literature, this is hardly uncommon.  Brutal times draw forth brutal literature, and that includes scripture.  I recollect being scandalised by a passage in the Bhagavad-Gita some years ago, every bit as contemptuous of human life as anything you'd find in the Pentateuch.  Viewed as god-breathed holy writ such passages are an abomination, but seen as examples of national literature at a time of robber-baron royalty... not so much of a surprise.

My nomination, seemingly far more benign, comes from the pen of Paul the apostle:  Romans 13:1-5.

13 Every person should place themselves under the authority of the government. There isn’t any authority unless it comes from God, and the authorities that are there have been put in place by God. 2 So anyone who opposes the authority is standing against what God has established. People who take this kind of stand will get punished. 3 The authorities don’t frighten people who are doing the right thing. Rather, they frighten people who are doing wrong. Would you rather not be afraid of authority? Do what’s right, and you will receive its approval. 4 It is God’s servant given for your benefit. But if you do what’s wrong, be afraid because it doesn’t have weapons to enforce the law for nothing. It is God’s servant put in place to carry out his punishment on those who do what is wrong. 5 That is why it is necessary to place yourself under the government’s authority, not only to avoid God’s punishment but also for the sake of your conscience.

This is a licence to do nothing in the face of injustice.  More than that, it is a churchly sanction not only to do nothing, but at minimum to give tacit support to evil.  If it had been taken seriously there would have been no American Revolution, no civil rights movement, no overthrow of dictatorships, no emancipation from slavery, no democracies.  In short, no progress.  Adhere strictly to Paul's advice and we'd all still live in totalitarian states, sanctified societies where the church counsels its members to quietism; sit down, shut up and do whatever you're told.

The ideal society of Romans 13 would look a lot like Nazi Germany, or, given its provenance, the Roman Empire.

And yes, it was indeed a popular passage in Nazi Germany.  Did you have qualms of conscience about disappearing Jewish neighbours, conscription into the Wehrmacht, the euthanizing of the mentally unfit?  Go read Romans 13!

From here we move out into the nightmare nonsense of Augustine's two cities and Luther's two kingdoms, the lethal concept of "left hand of God."  Truly this is a very, very long way from the teachings of Jesus.


And we have Paul to thank for it.

Anglo theologising has - to briskly stir the bucket - always been rubbish, especially as influenced by that deviant variety of Reformation thought known as Calvinism.  And yet it has been in the grey murk of Anglo Protestantism that slavish obsequiousness to the demands of the state - the Pauline imperative in Romans 13 - has been deemphasised.  It has been here that non-conformism found a voice, and a prophetic stance against the state made not only possible but acceptable and valued.  If for nothing else one is moved to say, thank God for the Methodists.

Romans 13 seems uncontroversial at first but, read with the standard set of assumptions (sadly, the most natural reading) it brims with the potential for the bitterest fruit of human oppression - authorised and enforced by God.  Paul is not talking about a liberal democracy like Sweden or New Zealand;  his point of reference is the iron grip of Rome.  What was Paul thinking when he wrote "The authorities don’t frighten people who are doing the right thing... Do what’s right, and you will receive its approval."  Did he not know that the Empire had executed Jesus?  The irony is that, according to legend at least, he too was soon to be crushed under the boot of "God's servant."

No thinking person today could accept the implications of this passage.

There are other ways of reading the five verses.  Two I'll expand on in later posts.  But even if Paul (assuming Paul did write them, and its not an interpolation) was talking about something other than the obvious, that would not erase two thousand years of damnable precedent.

Two thousand years and counting.
Posted by Gavin R at 15:28