John Shuck has posted the second in his series of interviews - Will the Real Jesus Please Rise?  The first was with Jack Spong.  This time it's with Bart Ehrman, the Second Horseperson of the Post-Enlightenocalypse, and author of that grate little book (grate being my preferred spelling in this case) Did Jesus Exist?  John is a great (as opposed to grate) interviewer, and asks a lot of the questions some of us would likely have asked ourselves given the chance. 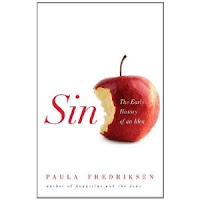 Next horseperson off the blocks is Bob Price, with the podcast due to hit the Web around June 5.  As we all know the third horseperson is mounted on a dark horse, and that seems entirely appropriate for Bob.

And a heads up about Paula Fredriksen's new book Sin: The Early History of an Idea.  It's already out on Kindle, and due soon in hard copy.  How on earth did we end up with the demented self-fulfilling prophecy of total human depravity and original sin?  Fredriksen hauls the culprits into the dock.  Praise the lord, and let's hope they all - and especially that Augustine guy from Hippo - get consecutive eternal lifetime convictions!
Posted by Gavin R at 18:31