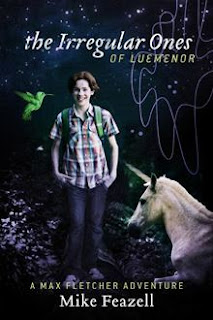 "MAX FLETCHER, a gangly, asthmatic teenager, is sure the gray van following him is involved in his dad’s disappearance. His concerns soon lead him into an inter-dimensional battle of wits and courage when a strange boy gives Max and the McKenzie twins, VIC and MEREDITH, a puzzling poem. Enlisted as Irregular Ones in the service of the Arkalos immortals, Max, Vic, and Meredith use their extraordinary powers to save Max’s dad from kidnappers, then set out to prevent KOS EIVAL of the planet Gentor from acquiring unspeakable powers and enslaving Earth."

That's the blurb to Mike Feazell's book for younger readers, The Irregular Ones of Luemenor.  It's the first of a series featuring lead character Max. Mike apparently has had a longstanding interest in children's literature, though any book that features unicorns on the cover has to be ten points down in youth cred. to start with.

I'm not sure there's a Christian subtext, but knowing Mike's background I suspect there has to be.  But this much one can confidently say, it's gotta be better than his serious stuff for adults!

In any case, here's the Amazon Kindle link: The Irregular Ones of Luemenor: A Max Fletcher Adventure