John Banks does it again 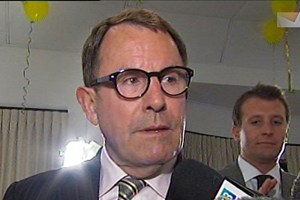 He has a glowing resume in the world of Kiwi politics.  Well, glowing may overstate it; his reputation has been well and truly tarnished by controversy over the years.  John Banks was a minister in a previous National government and then, for a time, mayor of Auckland.  These days he's the sole representative in New Zealand's parliament for the far right Act Party, and in a formal coalition with his former National Party buddies.

Life just keeps turning up roses for John.  The man who was turfed out of parliament once before by voters, then lost the mayoralty, was thrown a sop for his single one-man-band vote, a juicy cabinet position.  Described (jokingly?) as "barely literate" by a radio commentator, Mr Banks once again pulls in a handsome salary, this time not as a fringe radio talk-back host, but as associate Education Minister.

Now Mr Banks has come out in favour of the dumbest form of creationism on offer.  Being a politician, an expert on weasel words, he doesn't quite give his explicit endorsement to the YEC (Young Earth Creationism) fantasies... a point made on the Dunedin School blog (which has a transcript)... but it's pretty much implied.

Not for him the subtleties of ID (Intelligent Design).  It's doubtful he'd even know what that was.  Banks is reported in the NZ Herald as declaring "he believes the Genesis account of the start of life on Earth," telling Radio Rhema he has "no doubts the first chapters of Genesis are true."  "God made the world in six days, with Adam and Eve his last act of creation."

Which is fine, I suppose.  It's a free country and you can believe any thing you please, and the facts - let alone the scientific method - can go hang.

But for heaven's sake:  this man is associate Minister of Education!

And in secular New Zealand, not Uganda.

The political cartoonists should have a field day.

One particularly shallow press report states:  "Bible scholars are divided over whether this is a literal description or an allegory to help people understand how the world came into being."

I guess it depends what you mean by "Bible scholars," but the overwhelming majority of those qualified in the field of biblical studies know full well what the Genesis stories are - and aren't.

The well-heeled voters of Epsom, one of Auckland's wealthiest and most highly educated electorates, must be having palpitations.  They actually voted for this man because it seemed expedient, even if they had to hold their noses in the process.

My helpful suggestion is that they now settle back with a nice cup of Earl Grey and peruse the latest issue of New Scientist.  With a bit of luck, come the next election, they'll think twice before making the same mistake again.
Posted by Gavin R at 19:08