A Voice for Liberal Christianity 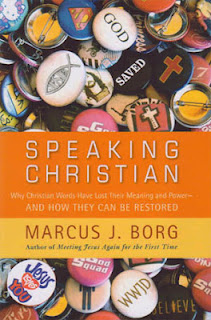 Marcus Borg is a leading voice for progressive Christianity.  What we used to call liberal Christianity before the evangelical fringe decided to use that term as a label of contemptuous abuse.  His books are a mixed bag, and I've cooled on him in recent times.  A refugee from Missouri Synod Lutheranism, that I understand, but what could have possessed the man to apostatise to Anglicanism of all things?

Be that as it may, his most recent endeavour, Speaking Christian, is an important contribution in defence of progressive Christianity.  These poor progressives live in the crossfire between their conservative brethren, who regard them as barely Christian at all, and many less than subtle atheists who gleefully fire spitballs and taunt them with loud cries of "rhubarb!"

Borg attempts to make a case that the progressive view is not only as legitimate as the Bible-toting evangelical mainstream (at least mainstream in America) but more faithful to the original.  A hard task that, I hear you say.  Borg however is undaunted in his quest to set the record straight, and for the most part this is a highly readable attempt.  The chapter on "The Creeds and the Trinity" is, for example, not only mercifully brief but even somewhat convincing if one is of a mind to prattle off the Nicene Creed without feeling that it's all complete nonsense.

Borg also takes a sideswipe at the ridiculous rapture doctrine (have at it brother!), and radically reinterprets a number of key concepts in the old 'heaven-hell' model. It's a noble cause in its own way, even if a bit Don Quixote-ish.

Despite some reservations, I'm of the view that he deserves a hearing.  A critical hearing to be sure, but much more than a casual dismissal from the trenches on either side or, even worse, those more thoughtful believers who are willing to give these views credence on a personal level, but are afraid to say so openly for fear of 'scaring the horses'.  The kind of Christianity Borg advocates is a very different beast from the stereotypes that bray so loudly and aggressively in the public arena.

And that in itself is refreshing.
Posted by Gavin R at 20:52