Jim West lards on the praise over these comments by Brian Mattson. 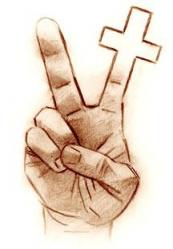 Since his dismissal, [Peter] Enns has so quickly evolved in his views that he now denies the historicity of Adam and Eve, denies that the Bible says anything about human origins, embraces theistic evolution, and denies the inerrancy and infallibility of Scripture.​ What happened to the "Enns is perfectly Reformed and orthodox" defense? One can still argue (wrongly, in my view) than he was right; one cannot argue that his views are compatible with the Reformed confessions.

Peter Enns, a Reformed academic who has been mentioned here before, is the author of The Evolution of Adam, a book which Mattson slates as "extremely provocative (and theologically poor)".  Those who sympathise with Enns are described as "acolytes".

Mattson, like anyone else, is entitled to a bit of polemical venting; fair enough, I've done a bit of that myself.  But what is pushing his buttons?  The poor guy is apparently herniating over the silly "Chik-Fil-A flap" and his eyes are, one suspects, blood red with holy homophobic indignation.  How he ties that into Peter Enns' views on the Bible is beyond me.

But putting aside that particular red herring, let's just pause for a moment.  Enns is charged with:
And because of this his views are incompatible with the Reformed confessions?

If that's the case, then there is either something horribly wrong with the Reformed confessions, or at least Mattson's wooden approach to them.  To put it plainly, Adam and Eve are mythical characters, the Bible writers lived in a pre-scientific era and were therefore incapable of conveying information about human origins (though that's not to say that some of them didn't have deep insights into human nature), and the idiotic concepts of inerrancy and infallibility are relatively recent theological aberrations.

Facts however can't be allowed to compete with dogma; what Mattson calls "God's transcendent and utterly reliable revelation to us."  Now there's a fine example - it's tempting to say a revelatory example - of Reformed bull-roaring.

Maybe I'm missing something here, but it seems to me that Mattson has just succeeded in shooting himself in the foot.
Posted by Gavin R at 22:53