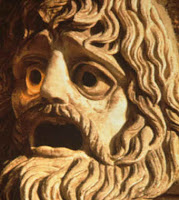 A nice posting appears on the Auckland Theology blog by Caroline Blyth, called "Before you say a word..."  it's a shortlist of the stupider examples of 'verbal folly' (foot in mouth disease) recorded in the Good Book.  There's the story of Jephthah, the genius who vowed to make a burnt offering of the first thing to meet him on his return home - only to be met by his daughter (who was he expecting, his mother-in-law?)  Adam, the excuse-maker (it was the little woman who did it!), and Yahweh himself, enjoying a gentlemen's wager, and in doing so agreeing to the ruin of Job and the murder of his kids just so the Adversary could prove - or not prove - a point.

What do we do with stories like these, apart from grimace?  Even allowing for the characteristics of the various genre - what edifying lessons are there to be learned?  Preachers strain mightily in such tasks but, as it says in Ecclesiastes, usually bring forth little more than wind.  Is the very best possible something like "look before you leap"?

In the case of Job it's generally agreed that the author has an intentionally subversive agenda, so perhaps we can cut some slack there.  Even then, literary subtlety in a largely preliterate society would, you have to suspect, have been an underdeveloped skill, and dangerously easy to misinterpret.  Do we risk imputing shades of meaning and depth where none were intended?  Obviously. The finger pointing in Eden is more a cause for hilarity than reflection, and a wonderful resource for cartoonists.  The Jephthah incident simply horrifies us, moreso because there's absolutely no indication in the text (Judges 11) that he did anything wrong by following through on the vow; the poor chap had no choice!

So what  do those of us who love the Bible, warts and all, do with stories like these, apart from avoid shallow homilies?  Yes, you can "preach against the grain", but why bother with something so counterintuitive when we could all be enjoying a nice selection from Tolstoy instead?

I doubt there's a short answer.  Therein lies the problem.
Posted by Gavin R at 11:54