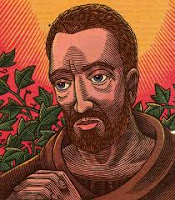 Today, November 13, is the birthday of Saint Augustine, 354-430 CE, a man who Pope Benedict has (in the words of US News and World Report) "long claimed St. Augustine as his theological lodestar," and the guy who wrote the Confessions and City of God.  He's rightly regarded as a pivotal figure in Western Christian history; but for good or ill?  To read the hagiographies you'd think it was all children singing in the garden (tolle, lege: "take up and read") deep thoughts and pious introspection.  Perhaps that's why he is designated in Catholic tradition as the patron saint of theologians

However Augustine, as James O'Donnell shows in his warts and all biography, was a relentless self-promoter and social climber.  Among his gifts to humanity was the "Just War Theory."  Hey, thanks for that.  Not content with resting on that dubious accomplishment, he also concocted the doctrine of original sin, "his most original and nearly single-handed creation."  The great man was also big on predestination.  As Paula Fredriksen puts it:


It is hard to love Augustine. He stands as the source of some of the most baleful traditions of thought in Western culture. All humans, he held, are born indelibly marked, indelibly marred, by original sin. Human desire, especially sexual desire, is a premier sign and effect of Adam’s fall. Unbaptized babies go to hell. Salvation is a question not of human effort, but of divine predestination. The church, to propound spiritual truth and to protect it, should avail itself of the coercive power of the state. These are all Augustinian teachings.

If you need to know something about Augustine to understand Ratzinger, the same is true of Luther (who suffered from his jaundiced view of good deeds) and Calvin (who took his understanding of predestination in even more bizarre directions).

It's enough to make you almost wish that, in the theological battle with Pelagius,  Augustine had lost the debate and that Augustinianism, not Pelagianism, had been left behind as a forgotten footnote in Christian history.
Posted by Gavin R at 15:53