A Hotbed of Atheism on the Bailiwick 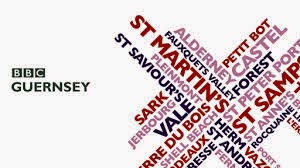 I was listening in, as one does, to a morning programme on one of the BBC's regional stations via Tune In bluetoothed (which, if it isn't a verb, should be) from my iPad to a decent speaker. I believe it was BBC Radio Guernsey. This is not something one might often do, unless one was living on Guernsey. Guernsey is the answer to one of those improbable questions educational researchers ask unfortunate eleven year-olds in order to prove how little the kids know these days. Nonetheless it's a station with a good deal of warmth and character, and I take some pleasure in knowing I'm probably the only person within a 500 kilometre radius who has as much as bothered to sample the Guernsey broadcast breakfast fare. More-so given that breakfast in Guernsey corresponds to mid-evening in New Zealand.

The funny thing about British (and Irish) public radio is that they still run programmes of a type that have long since disappeared from their counterparts in the Antipodes. I grew up with the theme from The Archers dutifully rebroadcast daily here in Her Majesty's farthest Dominion, morning and evening church services live on Sundays, and the awful, horrible "God Spot", wherein some craven, witless Anglican prelate; earnest Methodist preacher, or ratty Presbyterian cleric, would intone sagely on some navel gazing topic of the day. Thank heaven they've all disappeared from the local airwaves... with the exception of The Archers which, though long lost to Kiwi listeners, is available as a podcast, and which I confess to following still, causing a good deal of unjustified mirth in some quarters.

But back to the deadly God Spot. BBC Guernsey still has this bit of fluff scheduled for the edification of the good folk of the Bailiwick. I expect it's more usually an outlet for reverend gentlemen and gentlewomen of the cloth, ruminating on the spiritual significance of garden weeds over Easter. But on this particular morning - and I gather the old boy had been at it all week - they'd given the slot over to a local atheist. Who would have thought they'd even had atheists on Guernsey? This guy was no subtle, nuanced atheist, gracious and erudite - at least not to my ears - but your typical village atheist, with a wit about as sharp as a mallet.

Nonetheless, you've got to concede that, as the sixties folk song goes, the times they are a changin'.