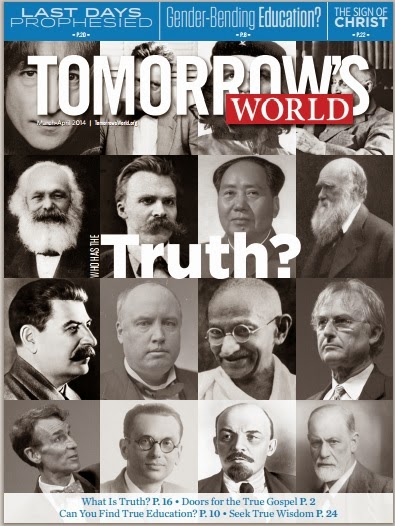 The current issue of Tomorrow's World has an interesting line-up on its cover. Mug shots of men (no women made the cut) the editors regard as very naughty indeed. People who provide false trails in the search for truth. (The editors, of course, have the inside track here, tightly clinging as they do to the coat-tails of Spanky Meredith).

There are the usual suspects of course: Mao, Stalin, Lenin, Nietzsche, Freud, Darwin... Hitler is missing, but poor old Dawkins gets the nod.

Then there are a few more subtle choices: Ghandi anyone?

But, egad, what did Bill Nye the Science Guy do to get elevated to this status? Oh yeah, that debate with Ken Ham. Still...

Then there are a few I can't place. Che Guevara is the only fellow in the top row I recognise. Anyone able to identify the others - partly obscured by the masthead?

All of which leads me to wonder whose ugly mugs you'd have put on the cover? (My nominations might include Ayn Rand, Ken Ham, Rush Limbaugh, Herb Armstrong, Milton Friedman, and John Calvin. Karl Barth is an outside possibility. I'd keep Stalin, and maybe Nietzsche.)
Posted by Gavin R at 13:28