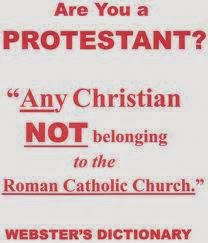 The word "Protestant" is in decline, and it's probably a good thing. I mean, what did it actually mean anyway? Inevitably it became a catch-all for anyone not Roman Catholic, apparently even confusing poor old Mr. Webster. Methodists and Presbyterians fit the original description without much challenge, but what about Anglicans, many of which - at the chinless, bells and smells high church end - sniff at the very thought.

How about Adventists? And what do we do with those pesky folk who defy the categorical duopoly completely? Orthodox, Copts, Mormons and, dare one even suggest it, the various sects of Armstrongism? And at the other end of the spectrum are those who opine that, with their traditional liturgy, Lutherans (who you'd think would be the 'gold standard') aren't Protestant enough.

You can now, unless perhaps if you live in the North of Ireland, get through months on end, even when regularly dealing with Christian literature, without tripping over the "P" word. The world is no longer split along a myopic Reformation divide, something that follows from the increasing diversity in Western societies.

So is the word, or even the concept of Protestantism, useful any longer?
Posted by Gavin R at 12:47