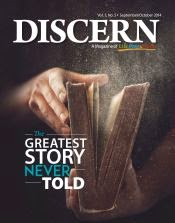 Discern is the magazine you're having without having a magazine. Subscribing means downloading what looks like yet another 30 year-old Plain Truth clone in PDF format. So, without further ado, knock yourself out on the latest issue.

Considering the fiasco that precipitated the formation of Discern's sponsoring church body, it seems somewhat amusing that there's a feature article on "Dealing With Difficult People." Dear old Paul Luecke has an article addressing the all important question of how you keep your kids safely dumb and ignorant on the subject of evolution. There's a slap-back piece on an upcoming Left Behind movie, and Neal Hogberg bemoans secularisation in Britain with a rant entitled "The Island That Forgot God."

But wait, there's more! Jim Franks has a major rehash on the Holy Days and what they mean according to the standard Church of God interpretation which, while hardly credible, can at least be described as imaginative.

The layout is good, the graphics are nice. But is anyone paying attention? Discern is The Trumpet lite.


The Philadelphia Trumpet - affectionately known by many as "The Strumpet" - is the banshee-mad monthly mag of the seriously worrisome Philadelphia Church of God.
Posted by Gavin R at 07:58