Is there Intentional Fiction in the Bible? (Part 2)

[Back in 2012 I wrote a piece called 2 Peter - A cuckoo in the nest. It has since continued to crop up on Google searches on a fairly regular basis, and at the time attracted some interesting comments. I want to revisit that discussion in the next (3rd) posting in this series, but for now here's that original post to provide the context for what follows.] 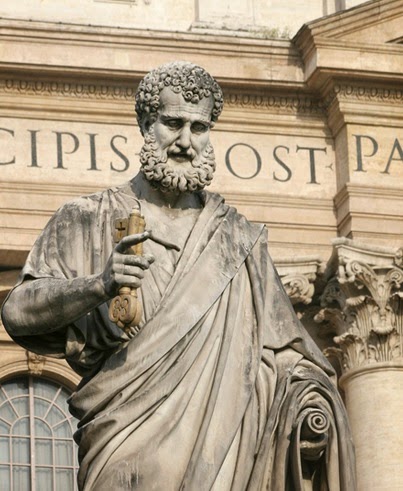 The New Testament book of 2 Peter is almost universally regarded by scholars as pseudonymous.  In other words, it wasn't written by Peter but by someone else and much later.  This comes as news to many biblicists who are convinced otherwise based on little more than wishful thinking.

2 Peter belongs not only to the literary genre of the letter, but also to that of "testament"... In Jewish usage the testament was a fictional genre... It is therefore likely that 2 Peter is also a pseudonymous work, attributed to Peter after his death... These literary considerations and the probable date of 2 Peter... make authorship by Peter himself very improbable.

Scot McKnight, writing in the Eerdmans Commentary notes that 2 Peter

was probably composed within two decades after his death. No book in the Bible had more difficulty establishing itself in the canon. As late as Eusebius (d. 371) some did not consider 2 Peter to be from the Apostle or part of the canon... doubts continued for centuries (e.g., Calvin and Luther)

There is clear evidence that 2 Peter is either dependent on Jude or on a later revision of a tradition used by the author of Jude and then by the author of 2 Peter... The letter probably emerges from a Hellenistic Jewish context, probably in Asia.

Neither Bauckham nor McKnight can be regarded as skeptics, both are firmly within the conservative Christian tent.  Bart Ehrman, on the other hand, isn't. He notes that


whoever wrote 2 Peter, it was not Simon Peter the disciple of Jesus. Unlike 1 Peter, the letter of 2 Peter was not widely accepted, or even known, in the early church. The first time any author makes a definite reference to the book is around 220 CE, that is 150 years after it was allegedly written. It was finally admitted into the canon somewhat grudgingly, as church leaders of the later third and fourth centuries came to believe that it was written by Peter himself. But it almost certainly was not... As scholars have long recognized, much of the invective is borrowed, virtually wholesale, from another book that found its way into the New Testament, the epistle of Jude. This is one of the reasons for dating the letter itself somewhat later... it is dependent on another letter that appears to have been written near the end of the first century.

Sadly, none of this prevents idiots from playing fast and loose with the text.  Elsewhere I've noted the suggestion by a magazine writer that 2 Peter 1:12-15 proved ol' Pete himself was a prime mover in the creation of the canon!  Even worse are these downright deceptive notes provided in a copy of the awful ESV Bible.


Peter probably wrote this letter from a Roman prison about A.D. 67-68, shortly before his death... Recalling his firsthand experience of Christ's glory at the Transfiguration (1:17-18), Peter explains the "more sure" truth of the gospel as an antidote to heresy. (ESV, NT book introductions, 2 Peter.)

Total rubbish.  "Peter probably" did no such thing. This is whistling in the dark, hoping the peons in the pews won't dig beyond shallow reassurances. Ignorance is bliss.  Way back in 1981 James Barr wrote:


[I]t can be said, and should and must be said, that in some at least of the new 'evangelical' translations the Bible itself has been doctored to make it say the sort of thing that modern revivalist fundamentalists say...

[F]undamentalism is not basically concerned with the Bible and what it says, but with the achievement of dominance for the evangelical tradition of religion and way of life. (1981 foreword to "Fundamentalism".)

It's not that there was merely an innocent misidentification of 2 Peter's authorship, the forger deliberately misrepresented himself as Peter.  How do we know this?


16 We didn’t repeat crafty myths when we told you about the powerful coming of our Lord Jesus Christ. Quite the contrary, we witnessed his majesty with our own eyes. 17 He received honor and glory from God the Father when a voice came to him from the magnificent glory, saying, “This is my dearly loved Son, with whom I am well-pleased.” 18 We ourselves heard this voice from heaven while we were with him on the holy mountain.

To put no too fine a point on it, the author is telling blatant, in-your-face porkies.  He witnessed nothing with his own eyes, heard no voice from heaven and was not with Jesus on any holy mountain.  Bob Price pulls no punches:


2 Peter is thus a double fraud: it is not a Petrine writing, and its author is baldly lying about being an eyewitness to the Transfiguration.

So what do we do with 2 Peter?  Can it even be scripture in any meaningful sense of that word?  And if it can be, why not the Shepherd of Hermas, the Gospel of Thomas or the Book of Mormon?