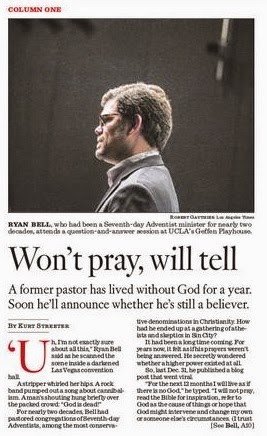 Ryan Bell isn't your average Seventh-day Adventist minister with a mid-life crisis. The December 22 issue of the LA Times features his year-long project to take "time out" from God and religion. In fact it made the front page.

Apparently Bell is planning to go public shortly on "where to from here" once the year is over. The SDAs, one suspects, won't want him back and, if Bell has any sense at all, he wouldn't want to anyway. Some form of re-commitment to a broader form of Christianity perhaps? Or will Bell out himself as a born again atheist?

Actually I don't much care what Ryan Bell has decided. Life is often more about struggling with the questions than reaching an end point. Too many times we hide from the uncertainties and whistle bravely to ourselves in the dark. If arch-apologist William Lane Craig is able to pontificate that "This is madness, spiritually speaking", then I'm pretty sure that Bell has done the right thing and need have no regrets. In the end it's about integrity, and there's a certain wisdom in simply respecting another person's journey, regardless of whether they end up in the same place you are.

My only questions: will there be a book? (98% probability) and when will it come out?