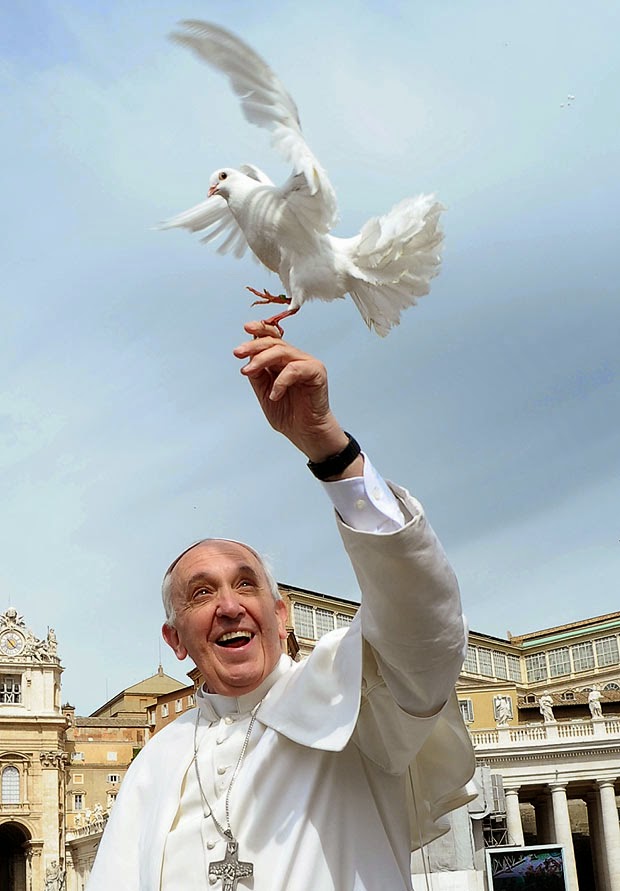 A certain popular Southern Baptist biblioblogger has recently labelled Pope Francis as the "hippie pope." But since when has anyone outside the Bible Belt paid the slightest attention to a ranting Southern Baptist preacher? Come the third resurrection the majority of those toasting their noodles in the flames of gehenna - apart from those screaming "Allahu Akbar" - will doubtless be clutching KJV Bibles and frantically humming The Old Rugged Cross.

The fact is that for many both inside and outside the Roman fold Francis is a breath of fresh air.

And just look at what His Wholesomeness has just said about the mafioso curia and assorted Vatican bureaucrats.

Shades of Luther and popes of more recent times who one suspects were swiftly silenced before they could threaten the mafioso priestocrats that traditionally hold real power in Mother Church; John XXIII and John Paul I.

Conservative Catholics will be joining hands with fundamentalist Protestants in cries of horror, if for different reasons. The prophecy panders in Charlotte and Edmond will be having conniptions as they try to shoehorn all this into their cramped preconceptions based on fantastical misinterpretations of the Bible.

Music to the ears of those with ears to hear.

Imagine someone with a fraction of the integrity of Francis taking over the mantle of a smaller pseudo-Protestant body - let's say for the sake of argument one based in Glendora, California (formerly in Pasadena).

Reform doesn't begin with dogma. That trots along in the wake. It begins with structural change, systemic change. It begins by throwing open the windows and letting in clean air. Not so easy in a church with a tradition as firmly embedded as Catholicism. What other institution has weathered the centuries as it has? Compared to his last two predecessors Francis has moved with lightning speed.

That not-so hypothetical Glendora sect put the doctrinal wagon in front of the organisational horse. They painted the wagon, re-padded the seat and oiled the wheels, then shot the horse and sent it to the taxidermist! The credit for this strangely stupid strategy ultimately lies with their own pope (Joe II) and his curia of that time.

The BBC notes "There was silence at the end of the Pope's speech."

I'd say he scored a direct hit. If he survives the backlash (and one can only pray that he will) it will be interesting to see what follows.


Tip of the cheese cutter to Reg Killingley who provided this link to the official Vatican statement. Unless you read Italian you'll need to click on the 'translate this' option.
Posted by Gavin R at 12:15