Beyond The Good News? 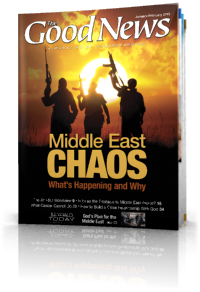 Many have been those who have wryly noted that The Good News, published by the United Church of God, is anything but a conveyor of good news. The lads in Milford may have had that in mind when they decided on a re-branding exercise which takes effect in 2015. More likely though, they're unhappy about low circulation (currently claimed to be 201,000). So out with The Good News and in with Beyond Today magazine. Will it make any difference? Unlikely.

Meantime the January edition, which will be one of the last issues under the current name, is available to download. You might call it the Islamophobia issue, but in case that's not depressing enough there's a feature on Ebola as well! (Subhead: Increasing pandemics prophesied). I'm sure Scott Ashley will take exception if I'm wrong, but all this stuff is written by staff writers - dare one say hacks? - not anyone with real world knowledge of any of these subjects. This means the GN has an awful lot in common with The Watchtower.

Lads, here's a tip. Stop trying to mimic a badly written current affairs magazine with pretensions of "inside knowledge" based on a horribly uninformed understanding of "prophecy". Just sayin'.

But never let it be said that the GN (soon to be BT) doesn't tackle the really big questions. Randy Stiver, the Einstein (perhaps closer to one of the bagel brothers than Albert) of UCG has another piece entitled - wait for it - Who Is God? Whoa! He begins in a positive vein: "There are several ways you can start getting to really know God."

I stopped reading at that point and ran out of the room screaming.
Posted by Gavin R at 17:00