Is there Intentional Fiction in the Bible? (Part 1)

Could there be - heavens forbid - parts of the Bible, whole books maybe, that are best described as fictional?

Well, we know what those wicked, hell-bound "militant atheists" think already. As far as they're concerned the whole thing is a series of improbable tall tales designed to keep us in intellectual servitude. Then there are fundamentalist sects where the very idea is anathema. However let's put both extremes to one side for the moment and consider a more nuanced approach. Could it be that certain books of the Bible were intended to be read as fiction by their writers - indeed, crafted as fiction? And, following the logic along, could it be that their contemporary readers (more likely hearers) were very well aware that they weren't intended to be taken literally?

Some Old Testament content has been widely considered as intentionally fictive for a long time. The book of Jonah for example presents a strong case. You could drive an ox cart pulling the Ark of the Covenant through the historical improbabilities in that one. 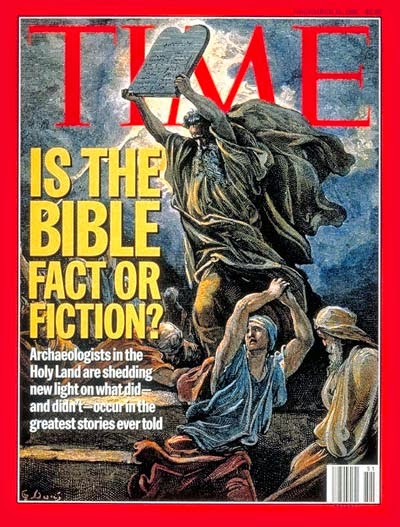 But of course that doesn't mean it is valueless. Jonah is ultimately a tale of mercy and common humanity, and that is clearly no bad thing. Focus on the historical bloopers and you miss the point entirely. Fiction, as any keen reader knows, can be edifying, inspirational and thought provoking. But there's a 'but' there. That judgement is a modern one, derived from an age of near universal literacy and the development of sophisticated genres of fiction. Those particular factors weren't around when Jonah first browsed the leaflet stand at the Nineveh Tourist Bureau.

Regardless, it seems likely that most of us will have no problem assigning some form of novel-like status to Jonah. The Bible is, I'd want to argue, much the better for its inclusion. Some of us might extend the same courtesy to large sections of the 'historical' books as well. Could there have been an exodus from Egypt in any traditionally accepted sense? The rocks of the Sinai cry out to the contrary. With Exodus it's a little more - actually a lot more - difficult to accept that the whole thing was intended to be anything other than a historical record, not merely a made up national narrative with an openly political agenda.

Yet the exodus story has inspired many in the quest for human freedom. "Let my people go!" has sounded down the centuries. Fiction maybe, but that doesn't necessarily disqualify it as scripture.

Or does it? It depends of course on your definition of scripture.

If we're comfortable with assigning fictive status to parts of the Hebrew Bible, how about parts of the New Testament? Let's set a high bar and set aside the gospels, miracle stories and all. In part two we'll focus on the most dubious of the epistles.