I'd like to acknowledge the receipt of a review copy of John Morgan's controversial new account of the death of Diana, Princess of Wales. This is a fuller treatment than his earlier Paris-London Connection, weighing in at 800 pages including bibliography, index and notes. It is an abridgement of the six volumes of John's previous work. And yes, it names names.

John, who has also written on his years growing up in the Worldwide Church of God (Flying Free), has entitled this new book How They Murdered Princess Diana: The Shocking Truth. Here's the publicity information released earlier this month. 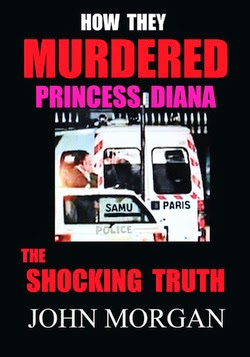 A bombshell new book published this week names the MI6 officer who headed the operation team that carried out the assassination of Princess Diana in Paris in late-August 1997.

The book entitled How They Murdered Princess Diana: The Shocking Truth is the most complete evidence-based account yet published on the car crash in the Alma Tunnel that took the lives of Diana and her lover Dodi Fayed.

Written by Australian author John Morgan – who has been researching the deaths for the past nine years – this book exposes Sherard Cowper-Coles, former British ambassador to Saudi Arabia, as the head of the assassination operation that orchestrated the car crash. Also revealed is substantial detail on how the murder was carried out – the naming of MI6 agents employed on the job and particulars about their respective roles.

The book reveals that Princess Diana was effectively murdered by deliberate mistreatment in her ambulance by people who were supposed to be saving her life. The author shows that this was a back-up plan which was automatically triggered after it became clear that Diana had survived the crash.

Morgan has spent years studying and assessing the huge amount of evidence pertaining to the Paris crash – including over 8,000 pages of inquest transcripts and official police investigative reports. He also analysed and published over 500 documents that were secretly supplied to him in 2010. The explosive material – which included the official post-mortem reports for both Diana and Dodi – came from within the Scotland Yard Paget investigation, but all 500 plus documents had been fraudulently withheld from the inquest jury in London.

How They Murdered Princess Diana covers the entire story of what occurred, including the massive post-crash cover-up conducted by British authorities. The book exposes the official 2007-8 inquest into the deaths as one of the most corrupt court investigations in England’s judicial history.

This is the first time the complete story has been addressed in such chilling detail – a true account using the witnesses own words that will at times leave the reader shocked, aghast and breathless.

A leading UK QC, Michael Mansfield, who served throughout the six months of the London inquest has stated:  “I have no doubt that the volumes written by John Morgan will come to be regarded as the ‘Magnum Opus’ on the crash ... that resulted in the unlawful killing of Diana, Princess of Wales and Dodi Al Fayed and the cover-up that followed.”

Speaking from his home in Brisbane Morgan – who features in a London play titled Truth Lies Diana starting in Charing Cross Theatre in January 2015 – says that the time is approaching when the parties who carried out the assassination must be brought to justice. He said that “the Paris crash was one of the most highly-coordinated inter-governmental operations ever carried out – and the ensuing cover-up over many years has been just as coordinated and just as sinister”. Morgan continued: “Many in the public now know that an assassination occurred on that night in Paris and are hopeful that there will be some justice and the perpetrators will be called to account, sooner rather than later”.

How They Murdered Princess Diana: The Shocking Truth is available at Amazon US: http://www.amazon.com/How-They-Murdered-Princess-Diana/dp/1505375061/ref=pd_rhf_dp_p_img_1

John Morgan’s 2012 book Paris-London Connection has recently been translated and published in the German language by publisher Kopp Verlag.

More information is available on John's website. You can also listen to an earlier interview with John Morgan on YouTube.
Posted by Gavin R at 15:13