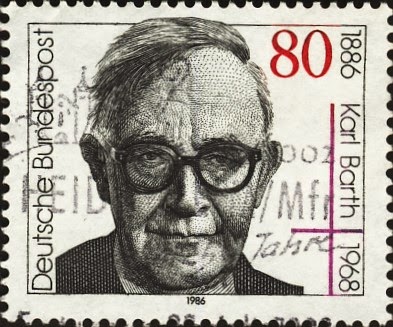 What kind of man was Karl Barth? Certainly he was studious, as you'd expect from someone with his scholarly reputation. He began his day with 30 minutes of 'reflection', then indulged himself by listening to recordings of Mozart. This done it would be time to catch up with the daily newspaper. Then the great man would retire to his world of books and writing till lunch. In the afternoon, on days he had teaching commitments at the university, he would travel in to give a lecture, then head straight back home to pick up his pen once more.

There seems little joy in such a routine (except for his musical indulgence). Biographer John Bowden observes that his "gazing into heaven may have dulled his perception of what was happening around him on earth..." It seems a valid criticism. He did have his peccadilloes though, included pipe tobacco and alcohol, and an unusual (even by today's standards) domestic arrangement with his secretary.

Those who met Barth might have been forgiven for expecting such a bookish man to be shy and unassuming, a kindly old uncle figure. If so they would have been quickly disillusioned. Barth was not given to modesty, comparing himself at times with such notables as Jeremiah the prophet and the apostle Paul. Nor was he given to generosity of spirit with fellow theologians, including Rudolf Bultmann and Emil Brunner (more of his dispute with Brunner later in this series). While a man of great wit, he has also been described as a verbal sadist. Not so surprising then that this "grumpy old man" rebuffed speaking invitations and left letters unanswered.

Barth had his devoted admirers both then and now. He was the acceptable face of European Christian thought in the post-World War II world; a role that may well have fallen to Dietrich Bonhoeffer had he not been executed by the Nazis. Despite Barth's very lukewarm attitude to Catholicism, Pope Pius XII (described by John Cornwell as "Hitler's Pope") considered him the greatest theologian since Thomas Aquinas.

Much of Barth's reputation rests on his leadership role in the Confessing Church, his part in writing the Barmen Declaration (seen as drawing a line in the sand with the Nazis) and his opposition to the Third Reich. This portrait of resistance is, as I hope to demonstrate, a simplistic and perhaps misleading one.