Beyond the Good News 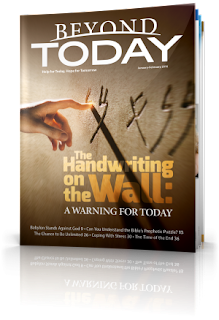 For the record, the lads at UCG have launched out into an exciting new era of magazine publishing.

In fact, The Good News has simply been re-branded as Beyond Today.

Think of it as putting lipstick on a pig.

If this seems rather harsh, consider what the theme of the first BT magazine is.

You'd think the lads would learn. Prophecy isn't exactly a subject they have a successful record in. Same old, same old, regurgitated endlessly. And in this first issue, predictably (no pun intended) they've got absolutely nothing new to say.

Gary Petty asks: "The Bible's Prophetic Puzzle - Can You Put It Together?" The artwork shows a jigsaw. Well, one thing I'm sure of, Gary can't put it together. Problem one, it isn't a jigsaw. But the lads have this thing about jigsaws, because on the next page there' s a picture of Nebuchadnezzar's famous image - superimposed on a jigsaw.

In UCG the Bible is one big jigsaw made up of proof texts that have to be slotted in 'just-so' to achieve 'understanding'. Earth to UCG, that's not how biblical exegesis works. Think hermeneutics instead of Herman Hoeh.

And lo, there's a silly little feature entitled "Why we watch world events - and why you should too." Nice. UCG (and before it WCG) have always made a big thing about watching world events (largely sourced from right-wing pundits), and with an astonishing record of consistency they've always misunderstood them. Just check back on one of those 1930's issues of The Plain Truth, or think about the hogwash Garner Ted Armstrong spouted on The World Tomorrow during the Nixon presidency. You'd think they'd have wised up decades ago. If that sounds like ancient history, consider the age of the lads who sit in their padded chairs at Milford Head Office.

Maybe it would be more tolerable if they tried, just a little bit, to give some balanced analysis instead of the usual myopic baloney. If that's your hope, probably best not to hold your breath.

One final observation. Until now the magazine has had the subtitle "a magazine of understanding" ('borrowed' from the old Plain Truth). Now it's "Help for Today, Hope for Tomorrow".

The irony is that it delivers neither.