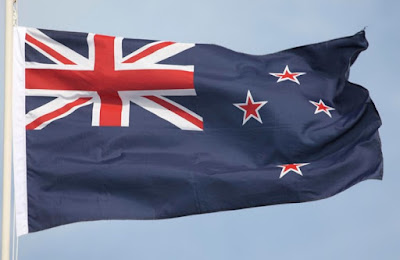 I'm a Kiwi. New Zealanders differ from their American cousins in a number of ways, not the least in how we regard our flag.

From a Kiwi perspective, Americans are weird about their flag. Hands on hearts, kids reciting pledges, salutes, displayed in all kinds of unlikely places - sometimes including churches; completely "out there".

Not so in Godzone. Patriotism is an understated thing in Aotearoa. I was in high school before I consciously noticed the difference between our flag and the Aussie knock-off (yep, those Ockers rarely have an original idea). My parent's generation still regarded "God Save the Queen" as the national anthem and referred to the rain-sodden fields of Old Blighty as "the old country", despite both being born half a world away.

For people of my generation the nuclear-free legislation was a first taste of national self-assertion, beginning years earlier with opposition to nuclear testing. New Zealand sent a frigate to monitor French nuclear tests in the Pacific, bringing down the ire of France. Later France, in an illegal act of state-sponsored terrorism, sank the Greenpeace vessel Rainbow Warrior in Auckland Harbour. How soon we forget.

Then there was the decision to bar nuclear armed ships from our harbours. Margaret Thatcher sent a high ranking women apparatchik, a toffee-nosed baroness, to tear strips off our then Prime Minister, David Lange, apparently under the illusion that the colonies must still conform to Downing Street. In a press conference following the meeting, fronted by the PM with the lady diplomat nowhere in evidence, Lange remarked that the British rep had probably left by broomstick.

Then, while our best buds, the craven Canberra crowd, huffed and puffed about our responsibility to do as we were told by the US, we were kicked out of the ANZUS defense pact. The result? Never had Kiwi patriotism been as prominent in peace time. Even today the conservative National coalition government cannot bring itself to repeal that legislation.

But flag waving was never part of that. That was something other people did.

On the weekend, driving around the local area with some old friends, we saw flags flying in what, by Kiwi standards, can only be described as profusion. Today I counted three flags flying within a just block of home.

The reason? We're gearing up for a flag referendum. The choice is between the current flag and a tea-towel design.

What fascinates me is that every flag I've seen flying in recent days is the one we have now.

I don't know what this augurs for the final referendum. Public opinion is always a fickle thing, and I fear time will favour the tea towel (and in the upper-income LOMBARD* suburbs of Remuera and the North Shore I suspect the tea towel is indeed in evidence). But, as I pondered those flags proudly fluttering from nearby houses, I had to wonder whether the combination of Southern Cross and Union Jack meant something more than a backwards nod to our colonial heritage. Perhaps it's also the flag we associate with the progressive policies that have set us apart as New Zealanders over many years.

I don't have a flagpole. But if I did, I know which one I'd be flying.


(* LOMBARD: alternative to Yuppie; "Lots Of Money But A Real Dick".)