Deutschland 83 and the Tsars

For those outside the UK who are nonetheless able to view free-to-air British television via live HD streaming - amid much gleeful thumbing of noses at local Pay TV services (clearly Sky is not the limit) - here are some of the options I've highlighted through till Friday. 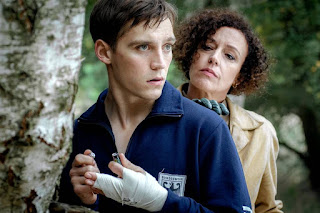 Deutschland 83 on Channel 4
Drama. First of eight episodes and the first German-language series to air on a US network (Sundance). This is its UK premiere. A tale of Cold War espionage with excellent reviews. (Sadly it clashes with the first episode of the new costume drama War and Peace on BBC1.)
NZST: 10 AM Monday [GMT: 9 PM Sunday]

Carry on Dick on Film4.
Movie. 1974. The Dick in question is Dick Turpin, and this is another outing by the Carry On crew. Sid James, Joan Sims, Kenneth Connor, Barbara Windsor, Kenneth Williams, Hattie Jacques, Bernard Bresslaw. They don't make 'em like this any more.
NZST: midnight Wednesday. [GMT: 11 AM Wednesday]

Empire of the Tsars on BBC4
Doco. Season 1/01
The beginning of the Romanovs' 300-year reign and the story of Peter the Great.
NZST: 4 PM Thursday [GMT 9 PM Wednesday, 3 AM Thursday]

Countdown on Channel 4
Game Show. At last! Back to its usual early daily morning repeat slot in the UK, which is just as well as the afternoon time corresponds to the wee hours in this part of the world.
NZST: 7 PM (Monday - Friday) [originally screening GMT:3.10 PM, then 6 AM ]